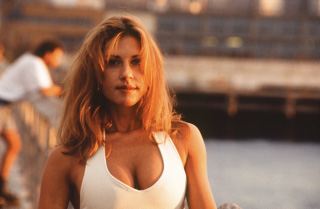 People sometimes take the beauty that surrounds them for granted rather than embracing it and realizing how relevant it is to their very being. Then there are those folks who live their life incorporating that same beauty into their everyday life. One such individual is the multi-talented Lisa Panagos. Lisa is a true nature lover who has been inspired and motivated by her surroundings. Whether she is taking in a sunset in LA or taking a stroll through Central Park the very ground she treads on evokes her creative juices.

She is instantly in tune with nature and it provokes her to write what she feels and create something just as beautiful. Lisa began sharing these thoughts and feelings from a young child when she began training in dancing schools. She took up tap, dance, ballet and other styles. Her God given talent began to flourish and become evident at the early stages of her training.

“For me, I like to focus on the positive. There are negative things to focus on in nature if you want. I often bring elements of nature into my writing and my acting and my dancing (Colors, feelings, metaphors (star filled night, sunny days etc.). From my point of view, nature is passionate. There are so many passionate elements to draw from nature. It is the ultimate source of connection for me to create original works, other than relationships.”

At the age of ten is when she first began studying dancing. Her parents exposed her to the beauty of dance and music. Lisa’s parents took her to see Ann Margaret perform in Las Vegas and she was floored by her performance. It was that show that catapulted Lisa’s desire to pursue the entertainment field. She also had the pleasure of seeing the show “Dancin” by Bob Fosse which sealed her love for dancing. Bob Fosee was the main reason that she set her sites for Broadway. She had attended a workshop where she was given pointers from Jimmy Slyde on tap. In addition, she met Cyd Charisse who also shared words of wisdom with Lisa. Cyd basically explained to her that the foundation of dance stemmed from ballet. This proved to be a fact to Lisa as she grew into the field.

Lisa was soon on her way to bigger and better things. Since she was pigeon toed her mother wanted to find someone who would correct that and help her find grace other than dancing. She then went ahead and modeled for Katherine Mizzell’s Modeling Moppetts for charitable events at first. Then modeling gigs did open up for her. This led to her being connected to Coral Leigh who hired her for a commercial. When Coral moved to New York City Lisa kept in touch with her and Coral suggested she audition as an actress in the Big Apple.

Lisa spent the summers in New York while she was studying for her BFA at Syracuse University. Coral offered her a good amount of exposure to develop her as an artist. Lisa first began studying dance in her native town of Potomac, Maryland. She attended the Potomac Dance Centre where owner and founder Liliana Andreu played a pivotal role in her honing Lisa’s skills.

“She gave me so much confidence and always looked out for me. She was tough and her training was thorough. She was born in Cuba and was a professional ballerina while living there. There is an innate passion and expressiveness that people of Latin American decent bring to their work. I was lucky to work with someone who extended their passion to their students and had a keen eye for corrections.”

Lillian supported her and encouraged her to attend various programs such as the Washington School of Ballet and during her senior year of high school she suggested that she study at the North Carolina School Of the Arts. The latter being a summer program which is by invitation only. Hence, Lisa was accepted to both schools and her experiences there were invaluable to her.

This opened another door were she entered the Arts Recognition & Talent Search contest where she won the honorable mention award. Lisa then moved on to perform in the play “Sophisticated Ladies” with the Duke Ellington Orchestra. It was her first professional Actor’s Equity job. She landed this role by being spotted in dance class at the Broadway Dance Center in New York City. The dance captain, Jacquelyn Bird gave her the opportunity to audition for the director, Claudia Asbury. She played the lead role of the Soubrette. Her luck did not run out there either but only grew.

Lisa also took voice classes with some of the most gifted voice teachers like, Carlo Lifavi Menotti, Barry Levitt, Rona Leslie and Don Lawrence. Carlo Menotti stood out the most for her since he took her under his wing and guided her and encouraged Lisa to grow with every step. After his death Lisa was unable to study under anyone else for a good year. He was such a strong force in her career as a singer that his passing was a major blow to her.

Lisa then moved out to LA to pursue music and film. She found it to be a lot more challenging scene that in New York. Between landing a few independent film roles and recording some new material she focused on studying with legendary acting coach Larry Moss at Larry Moss Studios. One of Lisa’s huge accomplishments was appearing in the blockbuster film “Donnie Brasco”. She had the pleasure of sharing a scene with Michael Madsen who played Sonny Black.

“You could just feel the presence of these amazing actors and how seriously they take their craft. I learned so much just by being there, watching and listening. They are all such brilliant actors. I was so lucky to have been on the set!”

Her father John Panagos was an inspiration to her as he was also a huge lover of music and anything to do with entertainment. He was the first to start an African American radio station in Washington, DC. The first was called WOOK Radio where he hired Lionel Hampton as his musical director. Her father also started the first Hispanic station WFAN. Both these stations were a key outlet for minority artists. Lisa’s father was no singer but he had an ear for music and was gifted with a strong vocal presence.

“Actually, my Dad had a phenomenal speaking voice and had been an actor in NYC with a brief run on Broadway in a play directed by Elia Kazan. Then when World War II came he became a dive bomber pilot and decided to take a different path in life following the war. So, I guess he passed on a musical torch to me in a way that I’m passionate about the work, like he was and through osmosis I learned so much from him and the celebrities I was exposed to while growing up. I am actually choked up about the thought of carrying one of his torches(he had so many to offer…music, publishing, newspapers) and it brings me to a point of sadness to realize that he has passed on during a time of my life when I may need him the most.”

Recently, Lisa has went ahead a recorded her first solid single entitled, “Minds Eye”. Lisa along with he writer / producer Mac Quayle listened in on a few tracks until “Minds Eye” caught her attention. She then went ahead and recorded the single which was written by Mac Quayle and Alex Forbes. Lisa has already completed a video clip of the single which can be found on her website http://www.lisapanagos.com/bio/.

Being of Greek background Lisa does admit that upbringing has contributed to her success. Besides all the jazz, rock and other American style music in her household Greek music was most prevalent. Her grandmother was an avid music lover and introduced her daughter to the ethnic music and dances at a young age. Lisa was fortunate enough to be exposed to the Bolshoi Ballet as they performed in the ancient theatre in Athens, Greece. The ancient amphitheater was a breathtaking experience for Lisa and just being there was fulfilling enough.

Lisa is always in search of new ways to expand her career and is busy in the studio putting on the finishing touches on her debut album. She is planning on releasing a few tracks as a teaser before the entire album is complete. At the same time she is reviewing a few film scripts and possibly may audition for a few roles. Lisa is a multi-talented artist who is full of life and full of promise an act worth following.