There is a saying that “one should never give up on what they love most”. This can be said for Chris St John who has done so much for others that it was time he fulfilled his artistic dream. He was always drawn to music, when he was just 5 years old he was hooked on the Beatles. From there he kept his ear to all types of music and wrote his first song at age seven. It was not until he was fourteen that he picked up his first guitar. Since then, he has grown as an artist.

Chris has been a prosecutor, judge and practicing attorney which is impressive outside of his passion of music. As we mentioned earlier Chris has proven to be someone who likes to give back. Only a few years ago he and a friend of his created a not-for-profit charity called HALO Missions. The Mission is set up to supply many major necessities for poor communities in Africa, Central America, and the Caribbean.

Now he offers his close to the vest music to the world. His single “I Called You Rose” made it to #3 on the Euro Indie Music Charts and #8 on the World Indie Music Charts.
The single was a prelude to the album “I’m Dreaming” the album features 13 tracks that take on trip into the mind of Chris St John. It also includes a cover of Peggy O’ and a musical score meant to connect both parts. The tracks on the LP offer many personal experiences that Chris had, some good and some tragic. From the loss of love to a special gift from his grandmother it makes you feel like you are there, and he is telling you his stories.

“My ability to take what happens to me in life and express it in song is the gift I’ve been given. It is a way to celebrate my joys and release my sorrows. The lyrics are not always direct, but the words come out the way they do, subject to later editing which feels like sculpting to me. It is cathartic, and my guitar is one of my constant companions, never letting me down during troubled times.” 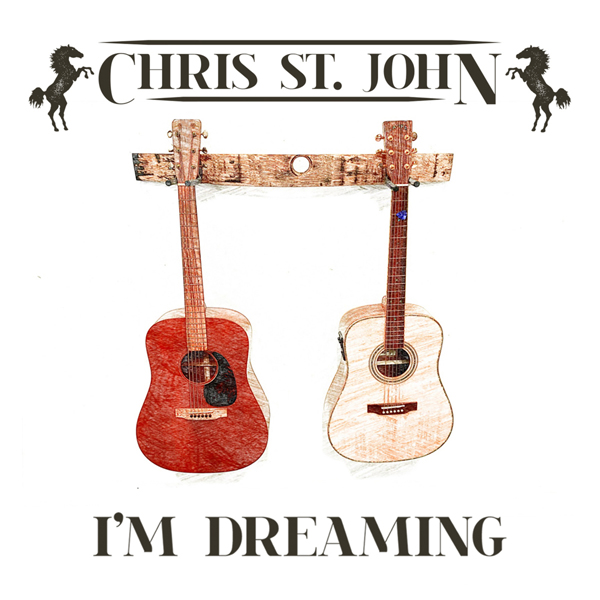 Even though Chris was self-taught playing guitar many years ago he took up formal lessons which helped him to develop his style. It aided him in finding new ways to express his music with different techniques. In addition, he has further developed his vocals to build his stamina especially when singing the same track many times to get the recording exactly right. The message he hopes to convey in his debut album is to:

“Follow your dreams. Persevere and be grateful for everything and the people in your life, including those no longer alive. There are sad songs on the album, but I think each share a sense of gratitude, hope and forgiveness.”