In the crowded club DROM in the downtown section of Manhattan a certain voice elevated the audience with elegance and style. It was the vocal chords of a shining star sprouting to spread her wings even wider. Sarah Shah’s star is rising as she has cemented her name and music with many fans across America.

Once you are a witness to her voice that is not only sensual but is complimented by its range and delivery you would be hooked. Sarah from a young girl has always gravitated to music in all its forms. At first she used her vocals in the Choir Academy in Harlem and began to develop her signature sound. At the Academy partnered with her longtime friend, Avionne, they joined forces to create their own singing and dance groups which helped them practice even more. This of course is not meant to take away the support and drive her parents and grandmother gave her to chase her dreams.

“My grandmother, rest her spirit, always encouraged me past the stage fright I had, to follow my dreams; as did my mother. So when my grandmother passed I made a promise to myself to honor that encouragement. As I’m on this journey in anything I do, I must also honor my mother who teaches me to this day, to be bright, and stay grounded, just like a sunflower.”

Her artist name Tournesoul was inspired by her grandmother, which means sunflower in French. Hence, her desire to stand tall and make every moment count in a positive way has been her mission. Sarah has made many strides in the industry so far she has performed at venues like the NYC Marathon, Amityville Music Hall, Highline Ballroom and recently DROM. The one venue that stood out for her the most was the Highline Ballroom only because she was able to perform along with her brother and fellow artist Quote The MC. The event at the Ballroom was for the RAW Artist Showcase.

So far Sarah has released an EP entitled “Aura” which came out in 2018. Her tracks “Take me Up”, “Save Me” & “Silk Sheets” have made some waves within the music world. Her goal is to release a full album but like anything else she is looking to grow her brand some more before going that route. Her voice has a certain flavor of such acts like Alicia Keys and even Whitney Houston. It is no wonder that they are a part of her inspiration musically.

“I definitely grew up listening to them and many other artists like Aaliyah, Monica, Sade, Lauryn Hill, Whitney, Alicia Keys, Erykah Badu, Floetry, Amerie, Vivian Green, as well as Beyonce. The list can honestly go on!”

Besides her music Sarah has always looked to help others in her community. She has become involved with such organizations like Youth Mentor & Step Dance Coach at SoBro. It is a program that offers extended learning time for children from elementary to middle schools. Only recently she was promoted to Leadership Development Specialist. 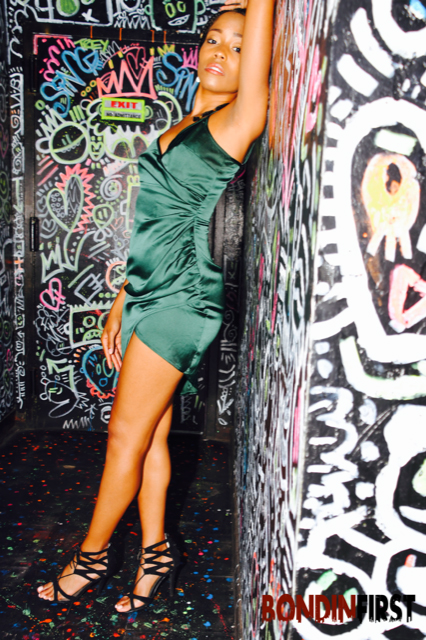 The program caters to students with special talents that channel their energies in enhancing their skills. It is not only a learning experience for the kids but also for Sarah.. She is not only a musical talent but a business woman to boot. She has developed her own production company along with two other like-minded individuals, Adrienne Smith, and SAG-Aftra Actor Timothy Mills. The company is called BondinFirst Productions which has created their own podcast called Kingz of Culture. Its mission according to Sarah is:

“We want to inspire people into knowing that you can always make nothing into something as long as you invest in yourself and understand teamwork. In addition to our goals, we want to encourage youth to follow their dreams in the entertainment world by getting them involved in projects that fit them.”

Sarah is a soul that believes in giving back and being humble in your pursuit for success. She has recently signed on with CRWN creative which will be assisting her on developing a stronger marketing strategy for her brand. In 2020 she is looking to expand her catalog of music and to perform in the US and internationally. This is one artist who is bound to shine brighter with every step.