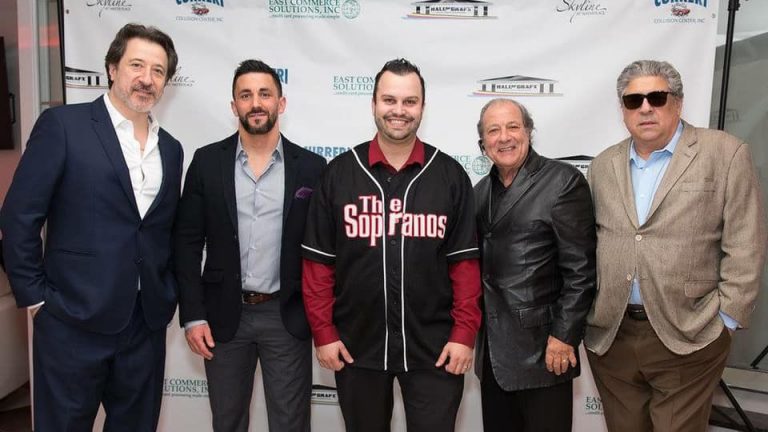 ONE OF A KIND CONVENTION COMING TO NEW JERSEY BY THE FANS FOR THE FANS: SOPRANOS CON

There have been so many types of conventions that have been held in NY and NJ but none that even come close to this. Conventions like Comic Con, Eternal Con, Chiller Theatre, Auto Show and so on have been the staple of large themed shows that have drawn hundreds if not thousands of dire hard fans. But the one about to open on November 23-24 will be a once in a lifetime experience.

The convention we are speaking of is called Sopranos Con, an event organized in honor of the HBO blockbuster show that dazzled thousands for 6 seasons. The “brain-child” behind this huge endeavor is Michael Mota, a devoted fan of the hit show along with two other fans decided to embark on this idea and fight to make it a reality.

“It is great to do something you enjoy and put your heart into it. This is a passion project for me and my partners Joe and Dan. It is not the first Sopranos event I have had but this one is a bigger scale.”

The event will be held at the Meadowlands in Secaucus, New Jersey. Michael has done smaller Sopranos events that featured four or five cast members doing a Q&A either at his restaurant or some other venue. He and his partners decided to tackle something with a bigger “bada-bing”. They wanted to develop a Con like no other that would be a fan experience not just a bunch of booths of people selling items.

As Michael explained it is prime time to do the Con. There is the 20th Anniversary of the show and the confirmation of the long awaited prequel by Dave Chase coming out in 2020 called “The Many Saints of Newark”. It is funny to note when the show first came out Michael wasn’t even interested in taking it in. It was not until curiosity gnawed at him and he watched the first season and he was hooked.

Michael is entrepreneur and has broadened his horizons as he runs two different businesses, ATOM Media and Skyline at Waterplace. His company ATOM Media is an international company that has clients like BENRUS, Benjamin Moore, FAMARS, BMAX, Sasha Liv, the Jeffrey Osborne Classic and many more. He also runs the Skyline at Waterplace that is a premier event company that can make any party one to remember forever.

Yet with all this work he still took on the behemoth of Sopranos Con. Michael’s partner Dan created the brand “Time Immemorial” (@timeimmemorial_ on instagram) in 2008 as a tribute to the Sopranos. The brand became a hub for the mega fans of the hit show. The network has managed to garner over 150,000 followers on Facebook alone.

“The fans will experience a feast like event with food, user experience RFID technology, themed music and even a tour bus of the actually Sopranos Con. Not to exclude the twenty cast members they can actually interact with.”

The event did first begin with a Gofundme account but was short-lived as the ticket sales were proving to be enough to assist in the budget to run the event. People forget this is being put together by fans for the fans. It’s not some big conglomerate putting it together but three friends from Jersey. Currently, they are focusing their energies on the cast members and the experience end of the event and not so much the vendors. So far there have been cast members like, Vincent Pastore, Artie Pasquale, David Proval, Federico Castelluccio, Vince Curatola, John Ventimiglia and more on board and the list continues to grow.

As a big fan of the Sopranos we asked Michael what he thought of the last episode when it all went black.

“I thought the way it ended there was a possibility of a movie or continuation of the show. But after James passed on I knew that it was not going to happen, until now with the prequel coming out.”

At this point tickets are still on sale but there is a limit. The venue can only accommodate 4500 people per day. This does not sound like a lot considering the fanfare this will generate. Since that being the case anyone reading this better get on the bandwagon soon. There have been folks from Australia and London who have purchased tickets already. And even a party bus has been locked in of people with VIP package tickets. This will be an event that will be remembered for years to come so don’t hesitate another day.

SINGING & ACTING HER WAY ONTO EVERY STAGE: NATASHA KAMINSKY