For the young, Anthony Patanella, who first got the nerve to put on the gloves in 2001 was never his intention to also adopt the nick-name “Stallone”. But that has stuck with him from the start of his boxing career. In reality, Anthony was first an avid wrestler when he joined the IWF (Independent Wrestling Foundation) which was around 1999. He wrestled all over the United States. But like most athletes an injury side-lined him and caused his departure from wrestling.

After rehabbing his injury to his knee he came back on the scene in 2005 but not as a wrestler but a boxer. In between this time he also pursued modeling which taught him a few things about how to present himself anywhere he goes. His first match was in 2008 in Plainfield, New Jersey for the NJ Golden Gloves Tournament. Anthony made it to the semi-finals where he came in contact with Frank Stallone. Frank advised Anthony to get involved in the Celebrity Boxing Federation, which was owned by Damon Feldman. Here is where he adopted the “Stallone” nick-name. His first fight was with Devon Moore where Anthony won by knockout in the second round.

“I went with Stallone as my stage name because Sylvester Stallone’s brother Frank Stallone got me into Celebrity Boxing. I wasn’t worried to not live up to the Stallone name because I knew my skills in the ring.”

His talent as a boxer soon was evident as he began winning against those most favored to win. Such opponents like Joey Parkinson whose record was 27-2 yet Anthony surprised many with a win. This was only the beginning of a long lasting love affair with the fight game. His powerful punch hit again with his third fight on April 3, 2009 with heavy-weight, Johnny Cashmare. Anthony again shocked the crowd with yet another second round knockout.

“My best challenger was Joe Parkinson from Pennsylvania. We fought and it was the most anticipated fight of the night the same night the main event that Danny Bonaduce fought Jose Canseco. I say it was the best because we were competitive as fighters and we couldn’t stand each other. He beat me by decision that night but he cheated with illegal hand wraps and they overturned the ruling. I always wanted a rematch with him since that happened but never came to be.”

In that time period Anthony managed to obtain two titles, Light Heavyweight title for the Celebrity Boxing Federation and the Cruiserweight title for World Xtreme Entertainment. One of his main goals is to win a third title in a different weight class like the 168 Super Middle-Weight. Then an unfortunate accident set Anthony back when a head injury sidelined him. Yet he was determined that he would return to what he loves, boxing. 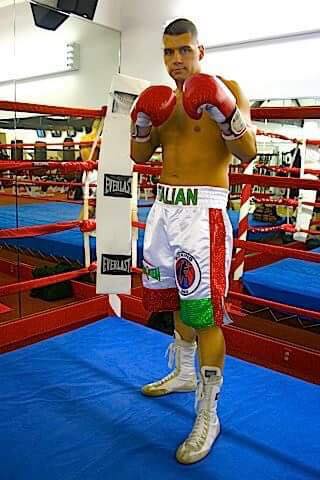 It took him from April to October to make his comeback when he took part in a charity event for the “Children of the Fallen Soldiers” at the LA Boxing fitness center. He came back with a vengeance and knocked out his opponent. Anthony admits that boxing has trumped wrestling for him. Since wrestling had never won him any titles it does not have the appeal that boxing offers. He would step into the ring for a few more bouts where he won every fight. Anthony would soon need to defend his title against Joe Magee in 2010 where he won by unanimous decision. In 2010 he left the CBF and focused on his modeling career. But he did return to the ring from 2011 to 2014 and made an impressive run as a growing talent in New Jersey.

Only recently he had a comeback fight against Miles Thomas who sent out an open challenge. The fight was held during the UWA Elite Setting The Standard” in February 2019, Anthony took the challenge and won by DQ since his opponent was cheating. For his most recent fight he took on a knew moniker which was Anthony “Gladiator” Patanella. It was not for any disrespect for is previous one but he thought he needed a change. Since then he has taken another road which was into acting and has appeared in the film “Clinton Road” by actor / director Steve Stanulis which stars Vincent Pastore (Sopranos).

“It was a great experience and loved being on the sets filming and meeting great actors and actresses. I really loved working for director Steve Stanulis. I would continue with acting roles if I had the opportunity.”

At this point in his career he is planning to attain a 3rd title in boxing and if possible some more acting and a stab at Stand Up Comedy. Anthony is not all fight he does have a funny side to him that few are lucky to know. So far he is living up to the “Stallone” and “Gladiator” nick-names and is looking to build on them one title at a time.