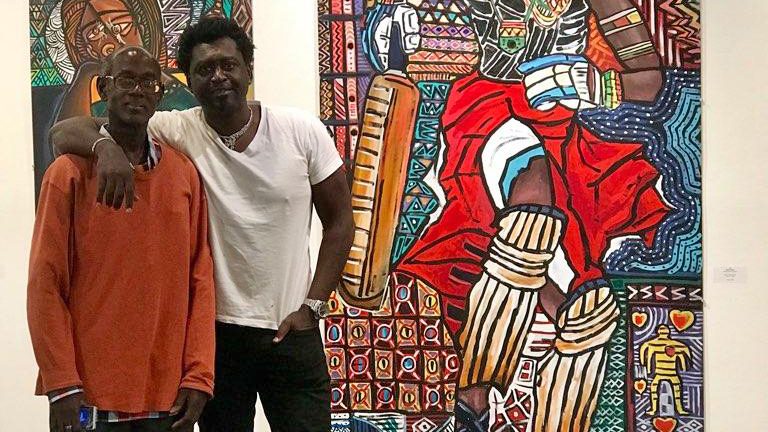 In life sometimes your true calling creeps up and reminds us who we really are. This would be the case for the talented Mark Anthony Hill. Mark went from being an over-night hero in his native Jamaica to be a sought out painter. He always loved art but was first drawn to sports as he played soccer and even was part of the famous Jamaican bobsled team in 1996-2006.

Mark’s journey first took root while in high school where he played soccer. Here at Cornwall College is when he made history by scoring the deciding goal and win the Jamaican Dacosta Cup championship title. This only sparked his desire to pursue another sports venture like being in the first ever Jamaican bobsled team. He would unfortunately miss out on the 2002 Salt Lake Winter Olympics due to a crash were he suffered a facial injury requiring 150 stitches.

This did not deter him from channeling his God-given talent as an artist to produce amazing works of art. Mark took to the brush and easel with fervor and has put his heart into it 100 %. Hill was heavily influenced by such artists like Pablo Picasso, Valente Malangatana Ngwenga and Wilfredo Lam. He was lucky enough to visit many museums when he took part of the Olympic team which began to light the artistic flame for him.

“I am inspired by African art first. Then I read upon the journey Picasso went on from 1907 to 1910 right after Henry Matisse showed him a mask from the African continent. What moves me about his work is the braveness he painted, regardless of what the art world thinks.”

His work is a fusion of African traditions and European cubism which is very unique in its presentation. Mark never plans his work he lets the painting led him to its final destination. He works on his paintings in a very interesting way he uses very little light. Mark believes utilizing minimal light forces him to apply more paint until it’s visible enough for him to see. When the piece is completed and exposed to light the colors become more vivid and powerful. The figures or shapes he creates come to life for the viewers who are lucky enough to see the results of his unique technique. He works and displays his pieces at One Art Space which is his home away from home.

It is important to point out that the extent of his art training was only during high school. He has what is called a natural artistic talent which is rarely seen. Mark likes to work outside of the norm a non-orthodox style of painting. He wants people to view his work that would trigger conversation and curiosity. His first group exhibition was in Tribeca, New York in August of 2018 at One Art Space the show did so well it opened another door to a solo show. The solo show was in October of 2018 also at One Art Space.

Presently, he is gearing up for new shows in New York and overseas. In March of 2019 he has a show in Soho and in June at the Manhattan City Council during the Caribbean Fashion Week.
He is also working on an exhibition to be held in China. Also in the planning stages is another show at One Art Space in October of 2019 and one in Los Angeles which will be curated by Ramon Rick Singley. Mark’s work is unique and one of a kind. To keep up with his shows visit his Instagram page at https://www.instagram.com/MarkAntonyHill