From Radio Host to an Advocate for women, JENFROMBK is growing worldwide

The tide is turning it seems for women everywhere as a desire to pull together and defend against any wrong –doing has taken root. Many women of power at some level have taken a personal stance to establish a better place for women in any industry. One industry that has some-what short-changed women would be the entertainment industry according to woman advocates. Jennifer Le, better known as JenfromBK is one of the many advocates fighting this battle.

Jen grew up from humble beginnings and has never allowed her success make her forget where she came from. She is as “down to earth” as they come and with her tenacity and Brooklyn toughness has made a name for herself in the radio world. She has been hosting her own show “Jen And the City” on Hot 97 for some time now.

“My show “Jen and The City” is still going strong and I am proud of it. Offering my spin on things which makes it interesting along with key guests it is one of the facets of my brand. It is a great tool.”

Only recently has the Asian community taken a huge step forward in America with the film “Crazy Rich Asians”. Jen admits that it was about time they had an exclusive voice on screen. Every community would like to see their culture depicted on screen and have the opportunity to tell their stories. This is one topic that Jen has always preached the need for diversity in all industries.

Her contribution to all communities, especially the Asian, has been recognized by organizations in the Tri-State area. She recently made history at the Jacob Javits Center for “Circle of Sisters”, the largest convention for women of color in New York City. In its 15th year, Jen put together the first-ever panel for TV & Film at the event in partnership with her company, Next Jeneration. It was a historical moment since it was the first time such a panel was introduced. The most interesting thing for Jen was the panel was made up of millennials. The youth has a voice and it meant a lot to her as it was a needed feature.

Jen’s company “Next Jeneration” is built on that ideal of nurturing young untapped talent infused with the experienced. They do not need a lengthy resume to be a part of her brand. If they carry the same morals and drive, creative talent, Jen has a place for them.

“Next Jeneration” is filled with talented individuals. We are generating projects in house and for clients that are forward thinking. We are the future of media, and I believe it.” 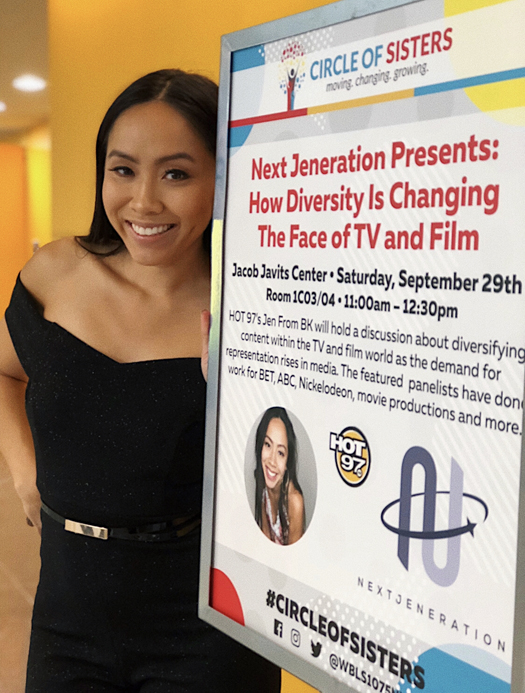 The company’s goal is to create a voice for women, the youth and diversity where it may be lacking. To her, creativity has no gender. The public places a gender on opportunities. As we mentioned earlier Jen has been honored many times for her work.

At the Brooklyn Borough Hall she received an award for her contributions to women on a local level. One honor she is especially proud of is when her and Next Jeneration won “Best Film Production” at a film festival in Texas for a documentary on Jen’s life. It was held by the organization Girls Impact The World Film Festival in Austin, Texas. Her intern at the time, Roxanne Lim, came to her with an idea of doing a film about Jen and her experiences. She was all for it but Jen never thought they would ever win amongst projects from all around the world. The film was entitled “Who is JenBkyn”.

“We sent the film in to the festival in Texas but never thought we would be nominated let alone win. We made Top 20 Overall too and there were entries from all over the world. Needless to say, we were stunned when they called us up to receive the award. The most important thing for me is to be able to inspire others to better themselves and never give up on their dreams.”

Besides radio, Jen has always wanted to venture into the TV and Film industry and now is working to accomplish that wish. She has a few projects in the works that she cannot mention as of yet. They are going to display a bigger part of JenFromBK that no one has seen yet. These projects are slated to be out sometime in 2019. Her goal is to make a mark in the film industry in a big way. We expect nothing less than that from Brooklyn’s own Jennifer Le.