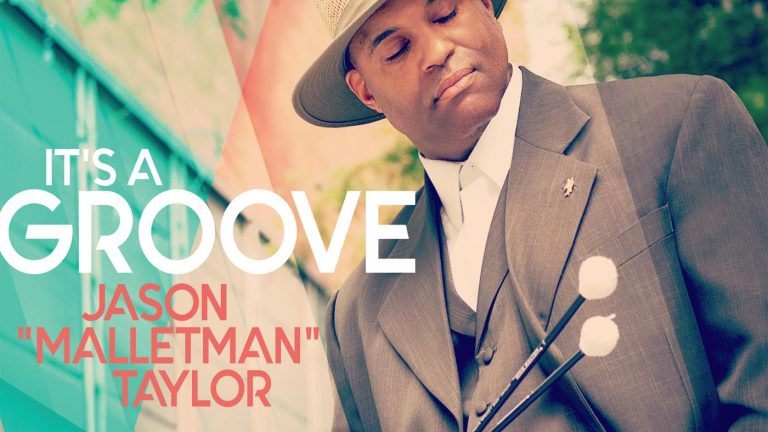 Jason “Malletman” Taylor has come on strong and taken on the music scene with a new show and a new EP. Jason is not a stranger to the music world as he was the protégé of the legendary artist Lionel Hampton. He has come up from being a student to running his own band.

In a recent swing through the New York area he took the stage at the famed Cutting Room. The audience was hyped up to watch Jason master the vibraphone once again. His energy filled the room as the crowd swayed and clapped to the music. His stage presence was powerful yet humble at the same time. He pumped up the crowd with a rendition of the hit song “Remember the Time” by Michael Jackson and then rallied them with his own track “It’s A Groove”. The packed club ended up being the chorus for “It’s A Groove”.

After he offered up a track by Stevie Wonder it was only a matter of time before people began dancing. When he wrapped up the last song the crowd erupted into an encore. He obliged with two more songs. He would have made Lionel proud with a show only Lionel could have topped. The show was a preview for his new EP “It’s A Groove” which is out on CD Baby, iTunes and has also just released on iHeart Radio.

Jason has a rich history of music from being a protégé for his mentor Lionel Hampton to opening for acts like Earth, Wind & Fire, Pieces of a Dream and others. He has been playing music since he was twelve years old when he picked up his first drum-stick. From there he learned to also play the xylophone then the vibraphone, which he has mastered. He has also tagged the music he plays as “vibra – funk”. An interesting title which derives from the instrument he favors most, the vibraphone.

He has graced the stage with Tito Puente, Jr., Brad Rutherford from Aerosmith, Chester Thompson from Genesis, Carmine Apice from Rod Steward’s band as well as Ace Freely from KISS so his versatility in music goes beyond jazz and funk.

He soon graduated to developing his own music after leaving his mentor Lionel Hampton. His expertise at the vibraphone garnered him attention from many other artists. This being the case Jason became a five-time Grammy ballot-nominee. The nominations were for Best Jazz Instrumental Solo for “The Christmas Song” (1998). In 2005, he released a CD single called “Live At Mallet’s Place” which featured an original “Once Upon a Mallet” and the jazz standard “Misty”.

His recent release is already feeling the heat. For this EP he brought together an arsenal of artists. It features Grammy winner George Clinton (known as the 70’s Funk Master) and the two-time Soul Train Music nominee vocalist Tony Terry. We must not also forget Jason’s own protégé, Devone “Da-vine Touch” Allison who plays the keyboards.

The recent EP was produced by the versatile Eric “E-Bass” Johnson who has performed with artists like Jay Z and Mariah Carey. If you are into jazz and cool funk, then Jason “Malletman” Taylor is your ticket for a wild journey.

Jason is keeping busy these days as he’s preparing for an upcoming trip to Southern California October 6th through the 8th; but before he goes, he’ll be playing in Oakland, New Jersey on October 4th as a special guest at Hansil’s

When he touches down at LAX on October 6th, his first stop is to the Inland Empire conducting a master clinic for a local high school in the City of Murrieta then an in-store appearance at Old Town Records in Temecula Valley. Saturday, October 7th he then will be a guest on “Breakfast with Gary and Kelly” a popular morning show on Radio Station KSBR 88.5 HD2 (www.KSBR.org) in the 11:00am (PST) hour; Jason then has another in store appearance from 2pm-4pm at PM Sounds Record Store in Torrance. To round out the day, he will be a special guest panelist for the Temecula Valley Music Awards that evening.

Catch up with him at http://www.malletsplace.com