Janelle Rosario, one of MASE (Make a Statement Entertainment) TV‘s longtime Contributing Editors, knows a thing or two about running and training for races (as she has more races under her belt than some full time runners)!

Her blog, Geek Fit Lifestyle, sheds light on her running journey over the years, as well as offers a space for those who wish to incorporate technology that’s beneficial into their daily journey. We had a chance to catch up with this fearless runner about her running experiences and her personal advice on how to fit favorite foods into the diet without falling off the wagon.

The Lifestyle Republic: How did this whole adventure with Geek Fit Lifestyle and running begin?

Janelle: Well, my first race was a small 5K in Queens in 2014. I was inspired by my friend Sydney who had started his fitness journey around the same time. He had invited me to do a stair climb with his team soon after.

After I did the 5K and the stair climb I wanted more so I started looking into other races and running more. It was history from there. I caught the “race bug” and couldn’t stop. GeekFitLifestyle came about because I wanted a platform to document my love for fitness and technology in one place. I thought of the name in the wee hours of the night, purchased the domain and got it started. You can now find most of my race recaps, cool reviews of fitness tech, and other health/tech related topics on the blog these days.

Was there ever a time when you thought you weren’t going to be able to finish a race?

Absolutely! I would say I felt like this the most during the New Jersey Marathon. Let’s start with the fact that it was already raining. Anyone who knows me knows I hate running in the rain. On top of that I knew I had a problem at around mile 7 when I felt hungry and realized I didn’t have my oat bars to munch on. I felt like I wanted to just make the turn for the half marathon distance and call it a day. When I reached the half point volunteers were giving out banana halves. I grabbed one while in motion, and noticed there were some also on the floor. I was tempted to pick them up and eat them. 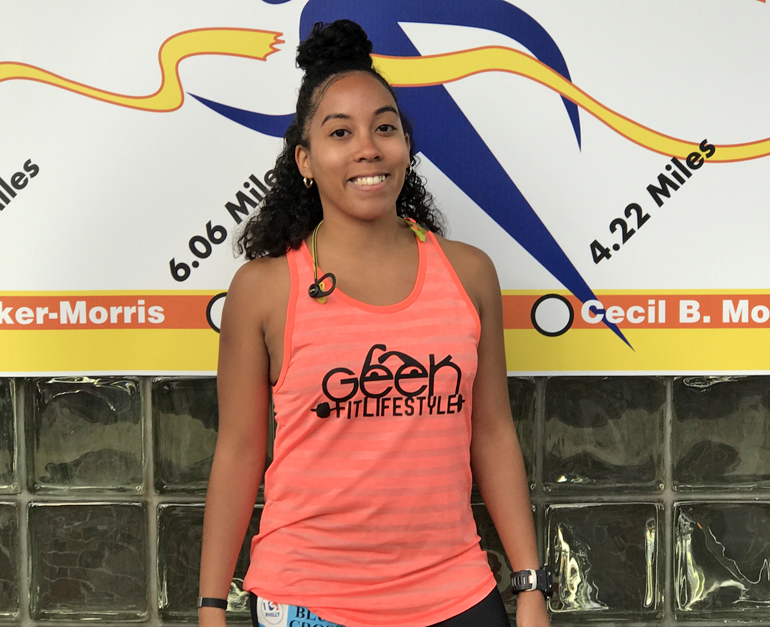 I decided to keep going but the entire time I asked myself how I was going to finish. I let go of the idea of beating my NYC Marathon time and really took it easy all the way to the finish. I was soaked and freezing but managed to finish in one piece.

Is it harder to deal with possible temptations (cheesecake, etc) when you are surrounded by others who are not as active in wellness/fitness?

I don’t find it harder to deal with possible temptations when I’m around others. Not to say I don’t have treats, but when I know I’m not supposed to be having whatever it is at the time I just wont get it. I try to have my treats in moderation. I get clowned a lot for it too but at the end of the day it’ll affect me, not anyone else. I’m all too familiar with the “oh you can eat whatever you want, you’re skinny” line.

Do you feel that the advancement of technology (wearable tech, etc) has helped in the world of fitness or has hindered the basic principles?

The advancement of technology I feel has definitely helped in the world of fitness. Because there are so many people out there who are open about sharing their stats and fitness goals, I think it inspires others to do the same. It even inspires some to even start paying attention to the amount of steps they walk per day and that in turn transforms into goals people begin to set for themselves. I think technology makes people more excited so if it gets them going in the right direction I’m all for it. You still have your old timers like my father, who isn’t so tech savvy, but still goes for a walk everyday.

Describe the challenges in doing the Bassman Triathlon sprint in Tuckerton, New Jersey last year, and would you recommend anyone who is still early in their transition into fitness to do it?

The Bassman Triathlon Sprint was my very first! I really enjoyed this race and I would definitely recommend anyone who is early in their transition to triathlon life to do it. The swim portion was pretty short at 700m but I did have a wetsuit on which is always a challenge to get on. Since I’m so short I was a bit freaked out by my feet not being able to feel the bottom but I flipped on my back to calm down. Lake Absegami is pretty shallow so those in fear of deep water shouldn’t fret too much and there was plenty of support in the water if you felt like you couldn’t make it over to the buoy.

I hadn’t practiced much swim bike run transitions prior so getting out of the water onto my bike took me almost 10 minutes. My wetsuit got stuck over my ankle band. I’m not a super fan of cycling either so those were indeed the longest 12.4 miles of my life. The course was very clear and didn’t have many signs, so at certain times I thought I was lost but I was doing just fine. The last portion off the bike to the running path had to be my favorite. You kind of feel like a baby giraffe trying to walk because your legs have this funny feeling. Once I got moving I felt better but that last part was also probably the hardest because you push to finish the best you can.

It was a great race and I’d recommend it for tri newbies. My good friend James was there to help me out as well so if you have someone to go along with you that would be best. You can’t go wrong with some support and your own cheerleader!

What is the one cheat day food item that you can’t live without no matter what?

Don’t judge me. It would be a centerbreast from Crown Fried Chicken with hot sauce and the mini sweet potato pie. It’s fried so nicely I just can’t resist sometimes.