Sara Ontaneda has managed to bridge the gap between to continents with her music. Hailing from the scenic land of Ecuador she first planted her musical flag in her own backyard. There she solidified herself as a sort after artist. For her first release (“Pero Hoy”) she focused her efforts in her native land before looking to take over the States. But she did realize that establishing a strong fan-base in America is far more challenging than in Ecuador.

“I do think that creating a fan-base in the States is a bit more challenging because it’s a bigger country, there is so much music being produced here and as a listener you have a lot to choose from. At the same time, I think that exposing your music may be easier in the States because there are more venues and festivals than in Ecuador.”

In the time that she has been in New York, Sara has made some impressive strides with every show she performs in. Recently, she played at the famous Bitter End promoting her new album “Entre Espacios y Colores” an album packed with strong lyrics with passionate melodies that grab you from the first track.
The album is her first attempt at a bilingual release which is part in Spanish and English.

“Writing the album in both languages wasn’t really a challenge because I have lived in the US for more than half of my life and have been lucky to be able to practice both languages all these years. However, I did have to think about how my audience was going to react to my bilingual work, since it’s not very common. It was very interesting to get messages on Facebook from Latin people telling me that their favorite songs were “My City” (which is very folk influenced) and “Darling”. And vice-versa, people that don’t really speak Spanish, telling me their favorite track is “Huecos”.”

Sara has been drawn to music ever since she was seven years old when she studied the piano. But she realized her true calling when she ventured back to Ecuador at thirteen years old where she studied classical music. While learning more about various genres she joined jazz and bossa nova bands which only broadened her music canvas. When she was well into her teens Sara began her journey into songwriting and began producing tracks with one of her many mentors.

This only garnered her entry into the Berklee College of Music; there she studied Contemporary Writing and Production. Her exceptional work afforded her many scholarship awards which would benefit her in the long run. After releasing her first single “Pero Hoy” in 2014 she came back a year later with “Marte y Júpiter” an EP where she took on several roles to complete (writer, recording engineer and producer). 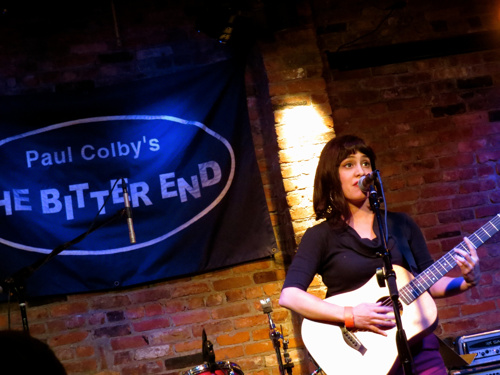 Sara performed at many venues in Boston, Miami, Austin, and some cities in Ecuador. But one of her most memorable shows was an artist showcase at SXSW in 2016 (South by Southwest Festival) in Austin, Texas at the venue Departure Lounge. Another earlier memory that stood out for her was when she was able to perform with a renowned musician and songwriter from Ecuador, Alex Alvear.

Her recent bilingual album “Entre Espacios y Colores” has been well received by both American and Latin audiences. This is a different type of project compared to her earlier release “Marte y Jupiter” which was a home-studio production.

Besides her show at the Bitter End she also rocked the New Jersey Folk Festival at Rutgers University on April 29 and then was off to Los Angeles to play a show at The Mint on May 8th.

Sara was influenced by many Latin artists on her musical journey like Natalia Lafourcade Monsieur Perine and Carla Morrison. But she has an eclectic playlist listening to artists like Hiatus Kaiyote to Laura Marling among others. Like the artists she enjoys she utilizes similar techniques like fusing her heritage with various genres. Sara is a unique artist is keep growing with every production and artist worthy of following.