It takes a deep determination to be able to tackle not one but three artistic disciplines with success. Kathleen Wilce has accomplished such a task. Since acting out nursery rhymes in her parent’s basement it was only a matter of time before she would take her talent to the lighted stage.

After offering free performances from home she would go on to be trained by the best Russian directors like Slava Dolgatchev and Aleksey Burago. She also attended Kean University where she majored in Theatre & Communications and also received a Directors’ Award.

“All of my mentors have left their impression somewhere deep within me. I’ve learned so much knowledge and valuable insights from them. Each one gave me a tool which I’ve placed in my tool bag and I give a little mental nod to them whenever I use it.”

One of Kathleen’s bigger inspirations in her journey into acting was Bebe Neuwirth. She caught one of her Broadway performances in Chicago at the Schubert Theatre and was convinced that acting was her path. It was only a matter of time before she would conquer the stage and fulfill her dream.

Kathleen soon would act in plays like “Not Now Darling” and “Obama’s in Town” which won first place at The Players Theatre SPF Festival. But she did not limit herself to just acting but also ventured into production and writing her own plays. She has produced her One Act plays like “Borscht”, “The Temp”, “Break in at Tiffany’s” and her solo show “Love Without Law” that were featured at Off-Broadway venues in NYC. This would move her to open her own company called Wilce Productions.

While working on both acting and producing she has found producing more of a challenge. Yet she admits it also depends on the project and the people you are working with. But in truth she sees herself as an actress more than a producer. At the core, an actor is what she truly is. 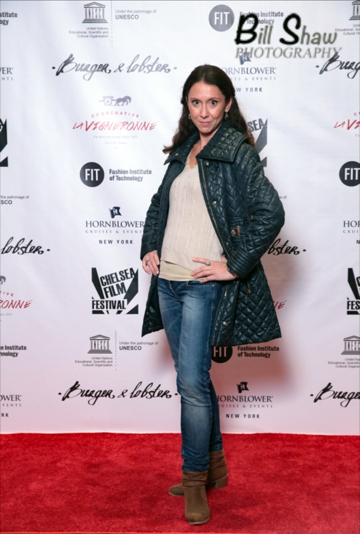 In addition to being an actress and producer she is also a writer. She has penned a few short children’s stories’ that she hopes will see the light of day. If not an Oscar to show off she hopes to at least have some funny stories to read to her son Nicholas. At the present time she is performing at the Medicine Show Theatre in Manhattan in the musical “Bound to Rise” which runs from January 26 till February 26.
www.medicineshowtheatre.org

In this production she plays five main characters that in some way affect one another. It is a time piece taking place in 18th Century NYC. It has a hosh-mash of characters from robber barons, high society and starving immigrants. It follows the lives of four heroes battling to come out on top for the love of freedom and justice. The original won the Obie Award thirty years ago.

Kathleen is always on the go and ready for the next hot project. After the run for “Bound to Rise” she will be moving on to her most recent play entitled “Italian Hospitality” a short comedic play that she wrote, performed and directed. The premise of the play is New York mob meets the Upper East Side. She had already performed the show in August of 2016 at the Medicine Show Theatre. Kathleen is looking to turn the play into a short film. She is trying to build a talented collaboration of artists and investors to move it forward. This is her current focus for 2017. For more updates look her up at www.kathleenwilce.com.