When you think of a tough town to perform live in, nothing comes close to New York City. Many have attempted it and few have succeeded, especially as an independent artist. Patrick Grant, composer/performer, is one of the lucky ones who has brought his mobile guitar show to the streets of New York in a big way. You may say; “Guitar show in the streets?’ Well that is exactly what it is. Patrick invented the idea of gathering a large group of guitarists who perform while being mobile. It is an innovative concept.

He first came up with the idea in 2011 when the organization Make Music New York asked him to create an event for the debut of Make Music Winter. Well he came up with an idea alright. He along with 30 or so other guitarists strapped on mini-amps and played in unison. It was a sight to see. Since it was the Winter Solstice when the earth’s axis is tilted he gave birth to the projects name as Tilted Axes. Also the name plays on the “nickname” for guitar, which musicians call an axe.

Ever since 2011 Tilted Axes has been busy entertaining many at festivals and outdoor events. They have performed at city squares, theatres, museums and anywhere they can. Patrick hopes to soon set up at galleries and planetariums. The performance is very adaptable and as he explained they prefer to be a part of something that is bigger than them. One example is at one festival they became a sonic billboard for the event. If one was to see them perform they are in a procession and move with the music creating formations. It is a sight to see.

“I write all the music and much of it consists of variations on the different musical styles that one associates with the electric guitar as filtered through the mind of a classically trained composer. That’s me. The players add their particular flare to each piece so it really sounds multifaceted. There are lots of layers. Our absolute ideal audience member is someone in the public who was not expecting us to show up. We are a surprise to them. They have the best reactions. Our repertoire is energetic and joyful so responses are along that line.”

Even though Patrick has played in many locales he can’t chose one better than the other but his experiences are priceless. He admits that sometimes there is no quick reaction from the crowd but what is more paramount is that certain parts of the show leave an impression. Those are the elements he takes notice of and improves on. There was one event that was overkill when he performed at Mayor DiBlasio’s, Gracie Mansion. They had forty guitarists performing but since then they partnered up with Vox Amps and they sound much better and use fewer guitarists.

Patrick at one time led a project called Millennium which was a compositional element that included work from New York, Sweden and China. It was extra special since artists like Billy Joel and Quincy Jones played a part as mentor/producers of the project. As far as a guitarist that he has worked with who stood out for him it was tough to say. But Robert Fripp came to mind who was the founder of the band, King Crimson. Patrick worked in the Guitar Circles and the Orchestra of Crafty Guitarists which was created by Robert. The experience was invaluable for Patrick as he meet and played with many talented guitarists.

He has also enjoyed collaborating and working with others on new events. One special one was when he joined radio producer Jocelyn Gonzalez and they created the MMiX Festival of Interactive Music Technology in NYC (2009). Even though it was a onetime event it was instrumental since it gave Patrick an opportunity to forge new friendships and creative contacts. He also produces content for The MMiXdown blog and is the co-director of Composers Concordance Records. 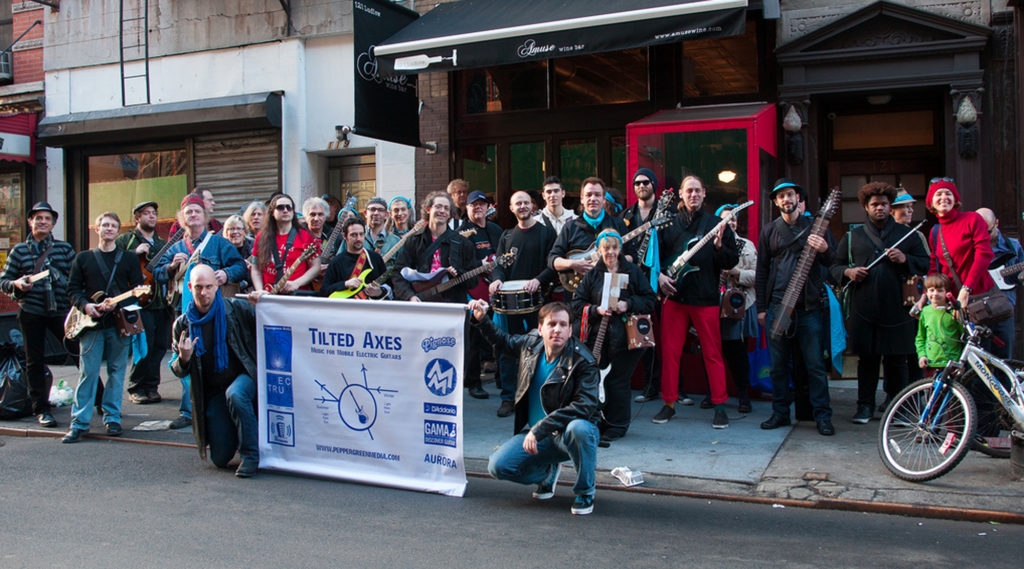 His work has not gone unnoticed as he has won a few awards along the way. At fourteen years old he won his first award from the Detroit News for a piece he wrote for a string orchestra and choir. It was a Neo-Baroque church cantata. Only a few years ago he partnered up with the Jed Distler’s Composers Collaborative and we won a Guinness Book World Record for the largest electronic keyboard ensemble. In addition, he received a collection of ASCAP Plus Awards.

On the forefront Tilted Axes has released their debut album “Music For Mobile Guitars”. Patrick realized that by performing outdoors it is difficult to record a quality piece. Hence, he gathered his crew and created a studio album. The album’s success is already creating a buzz as Tilted Axes has received offers to perform at festivals and tours. These shows will be made public once they are solidified.

As customary in Manhattan every Halloween there is a grand parade in the Village. Tilted Axes was an added feature as they brought their sound to the streets. Many fans and onlookers took in the sights and sounds of the group and are sure not to forget it. For more details regarding Tilted Axes music and events can be found at www.tiltedaxes.com.