From a young girl Long Long knew that she was destined for the stage and the silver screen. Her background is steeped in royalty which has been evident with her current connection with the Crown Prince of Italy. Long Long’s talent has no boundaries, from her velvety voice to her creative writing she is a full package.

Even though society has moved ahead breaking racial divides Asian women have not been given a fair share in the entertainment industry. Yet Long Long has been recently selected for the leading role in the TV comedy “Whatta Guys Really Want”. At a recent event held by the Success with Teamwork and Soulcity.me, she won first prize for the “Soul City NYC Best Dressed & Sexiest Outfit”. The event was sponsored by such companies like Comcast, Verizon, Dish Network, ECF (Extreme Cage Fighting) and JT Talent. This wasn’t the first time she grabbed a prize for her fashion designs. At a masquerade gala with the Crown Prince of Italy she won first prize for her handmade costume. The costume was meant to depict an “Eastern Dragon Princess”, with a snow white wing, custom and porcelain white skin and a golden masque, an angel reborn.

It is no wonder she has been a sort after talent. Her recent fashion project was made to honor her culture and homeland. She was dressed like a “pink flower fairy” which is connected to the city of Boao in China. That specific city of Boao hosts the International Music Forum, to which she was selected to perform for the Broadway Section in China.

The work that went into creating the dress is impressive from the flower strips to the shape of a crown in the hearts. To create the dress she searched for fabrics made in Italy or France. She used professional tailors to set it all right into place. It was not until the fourth fitting that Princess Long Long felt it depicted the theme she wanted to convey, “body in the west but the heart at home”. 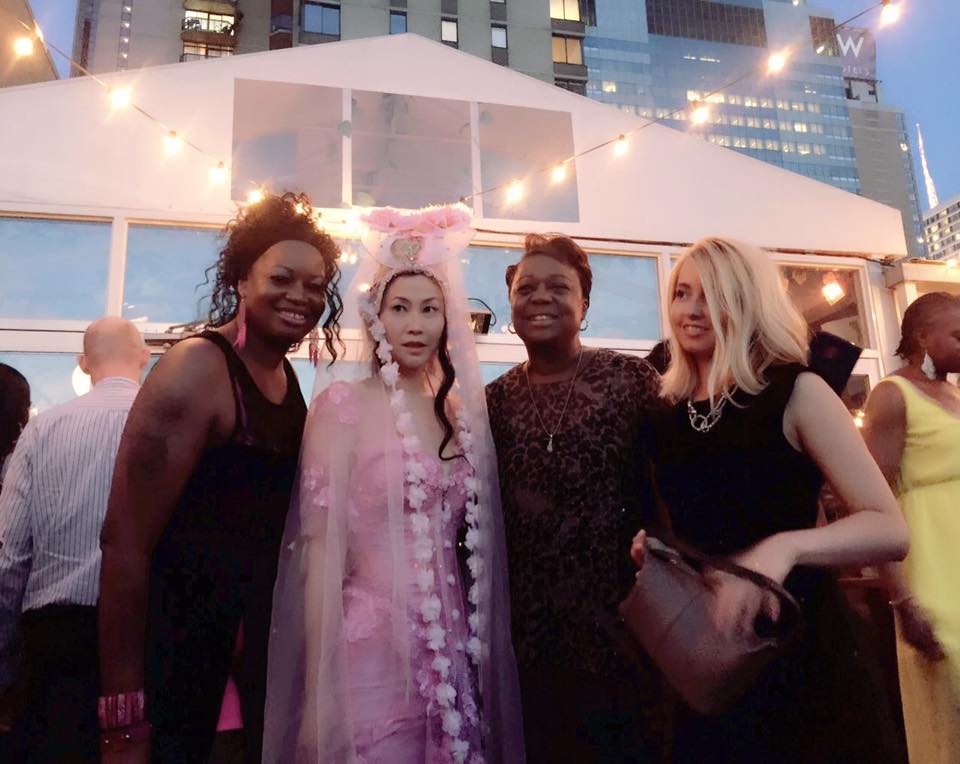 She is creative in many ways and not just in modeling and fashion but in writing. Over the years she has been fascinated with Chinese mythology and began to develop her own play surrounding her readings. She is looking to take her stories to another level. Her writings which are entitled, “Mythology Melodrama and “Bees, Birds and Fruit Fly” both offer a journey into love and a social understanding of the human spirit. Princess Long Long is looking to bring these tales onto the international stage and expose the rich culture of her native land but with a Western twist. The Fruit Fly tale is unique on how it is peppered with metaphors and philosophical ideals that are paramount to understand life’s values. She is looking to produce animation/ movies for these Chinese Myths. She has developed a key contact with the best distribution channel in China.

Long is a descendant of the Yanqi Royal family who are known for their artistic talents. Also we must note that Long’s family name means, “Dragon” in Chinese and it originates from the old Silk Road kingdom: Yanqi royal dragon family. They saw the dragon as God and who stands for all Chinese people. These talents have obviously been passed onto her. She has not ignored them and has put them to good use. She is now gearing up for the TV comedy “Whatta Guys Really Want”, which is being produced by Italian magazine publisher, Francesco Di Maio. Long Long has impressed many with her voice, fashion and beauty. This is one Asian act we all need to follow.