The New York City festival scene, which just last year supported only one festival, is now adding a fourth. Founders Entertainment, the creators of Governors Ball, announced the brand new Meadows Music and Arts Festival, set for Oct. 1 and 2 at the Citi Field complex at Flushing Meadows Corona Park in Queens. And for those upset that Kanye West’s headlining set at Gov Ball this year was lost to a thunderstorm that canceled the festival’s final day, West will be returning to New York City to headline Meadows. The Weeknd, Chance the Rapper, Kygo, the 1975, Grimes and plenty more are also on the bill.

Meadows — independently produced by Founders — will be the third new festival in the City this year alongside the long-running Gov Ball, which was sold to Live Nation earlier this year. Panorama Festival, produced by AEG Live’s Goldenvoice, is set for July 22-24 on Randall’s Island, while the Roots are expanding their Roots Picnic into Manhattan’s Bryant Park the same weekend as Meadows for a two-day festival put on by Live Nation and Maverick Management.

The location of this festival is significant; Flushing Meadows Corona Park was the initial proposed location for Panorama, sparking the public battle between Founders and AEG Live over plans to bring the festival to the city this year. The location was scrapped after AEG Live was unable to secure the necessary permits in time, forcing it to move to the same site as Gov Ball. The Meadows Festival will take place at the Citi Field complex.

Founders is promoting this festival as a make up of sorts for the cancelation of Gov Ball’s final day, particularly with Kanye West’s performance. After the weather cleared up the night he had been scheduled to perform, West led thousands of fans through the streets of New York trying to arrange a last-minute pop up show, which never materialized. Afterwards, he promised to make it up to his fans in the City — his headlining set at Meadows will fulfill that promise, according to a press release. Additionally, all previous Gov Ball ticket buyers will be eligible for a pre-sale beginning Wednesday, June 22 at 11 a.m., with a general on-sale beginning the following morning.

“Launching the Meadows Festival in Queens this fall with an incredible lineup of music, art, food and culture is a dream come true,” said Tom Russell, partner at Founders Entertainment, in a statement. “As a native New Yorker I grew up in awe of the innovative spirit surrounding Flushing Meadows-Corona Park. With this event we can shine a spotlight once again on this iconic neighborhood and bring with it the economic benefits, strong community partnerships and local hiring for which Founders Entertainment is known. We are so grateful to the de Blasio Administration and Metropolitan Hospitality for giving us this opportunity and to all the artists who have enthusiastically agreed to take this inaugural ride with us.”

Meadows will have four stages and more than 40 artists, with the full lineup below. 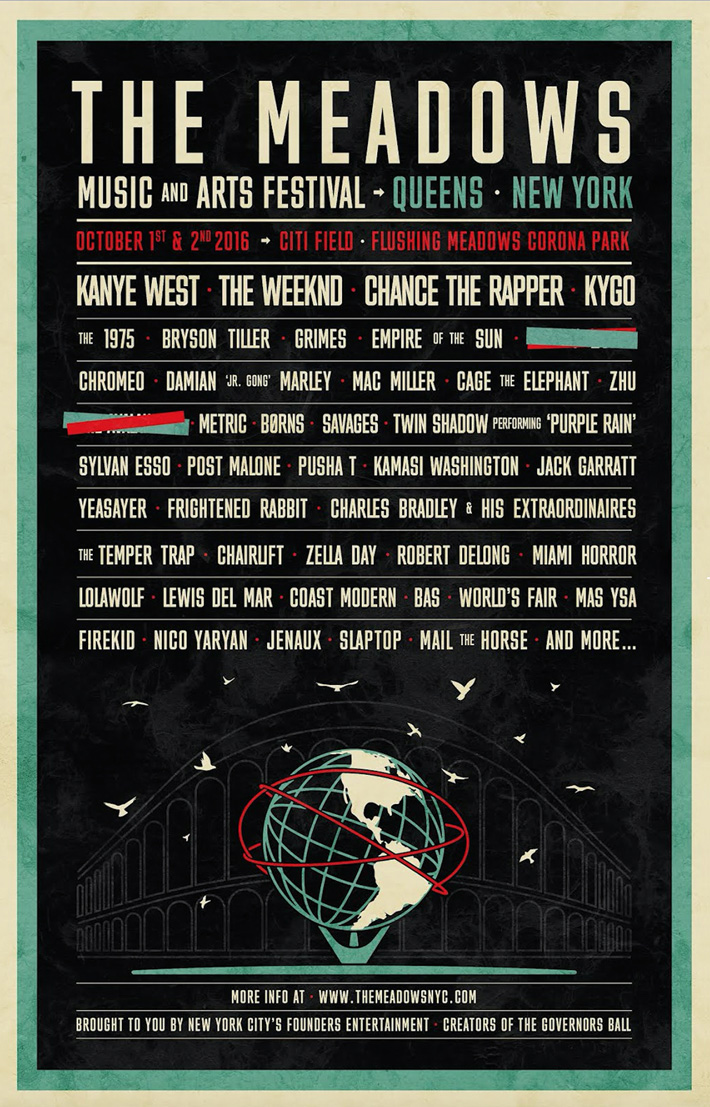