The Gift/Curse of PDA and Social Media

Public displays of affection are probably something we have all indulged in at one point or another – usually when swept up in the initial headiness of lust. We’ve all witnessed the couple who can’t keep their hands off each other on the sidewalk bench, or who look like they’ve not eaten for a week by the way they’re tucking into each other coming out of a Starbucks. And we’ve all felt more than a little uncomfortable when we’ve been the gooseberry to our friend and their new beau.

In a world where social media is taking over, we not only have to witness public displays of affection in the seat next to us in the cinema, but we now have to contend with it being plastered all over our social media networks too. Is it a step too far?

So the term public displays of affection, or PDA as it has affectionately become known, refers to that scenario when you see a couple unafraid to show just how into each other they are – no matter who is watching. “Oh, well that’s cute,” someone probably said somewhere, once upon a time. Now we have Twitter, Instagram, Facebook and the gazillion other social media networks where our friends and PWK (people we know) can bombard us with status updates and pictures of their ‘undying love’ for one another. Add to that with the equally cringe worthy ‘text-speak’ that seems to go ‘hand in hand’ with social media and it’s enough to push you to nights on the couch with a Pint of Ice Cream, Netflix, and more me-time (which can lead to other problems down the line if the Ice Cream becomes addictive).

Maybe the odd: “Happy birthday to my baby!!” is acceptable. The cringe alert bells lightly ring when someone posts the following: “One year four months with my love,” but top of the list has got to be: “Look at the roses and giant card my HIM bought me because he loves me just so much. Love ya babes.”

Now, that’s just a resounding ‘NO!’ all over. 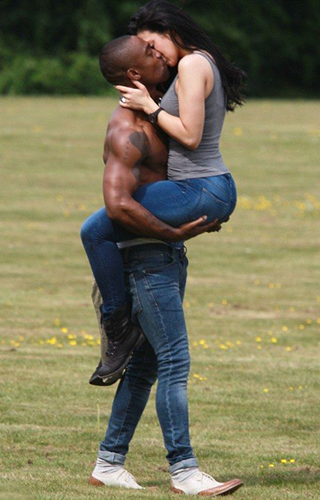 Twitter and Facebook seem to be plastered with constant updates from people desperate to tell the world just how much they love their other half. Valentine’s day is, of course, a fair enough reason to post these types of updates and the cringe factor can be brushed aside for 24 hours – not every day of the year though. You do have to wonder just how much do these love-sick culprits actually tell one another what they mean directly to their faces rather than attention-seeking online?

It’s not a case of bitterness! Plenty of people in relationships manage to avoid posting these updates. But there are more than a few who seem in need of some sort of social assurance. We live in the 21st century, so it’s not abnormal to be seen without your other half. Women are more independent than they have ever been – couples don’t need to be attached by the hip (and lips) to prove anything to anyone.

Let’s be honest, people are more inclined to appreciate and ‘like’ an update or a photo of a momentous occasion; like a romantic trip to the Bahamas for example or something that documents how much fun the said couple are having together – not a topless in-bed shot which is so obviously post-sex (we may as well as have been in the room there with them). That type of display is documenting just a little bit too much fun for our liking.

You wouldn’t compose a text to your loved one and then go and show everyone within a five mile radius before you sent it, so why post how much you miss them on social media? Relationships are a personal thing and perhaps that’s exactly how they should be kept.