FROM THE CARIBBEAN TO THE SHORE OF NYC: POP STAR KMC

It’s usually not the easiest mission to break into the American music industry coming from overseas but few manage it. Ken Marlon Charles, better known as KMC has taken on this mission and put into high gear. He is a native of Trinidad, the tropical island in the Caribbean that is known for its Soca music but Dancehall is the music that first caught his ear. He first took up the drums then the keyboards teaching him-self how to play both at a young age.

KMC’s love for music was a strong force in his life and every chance he had he would get out to take in local bands. Even when bands finished their sets and the show was over he would sneak in and jam on a drum set. As he grew into the music scene he managed to release sixteen records in the dancehall genre (which originated in Jamaica). But around 1997 he decided to change over to his native Soca sound.

Hence, he released his first Soca record in 1998 “Bashment To Carnival” which turned out to be a hot record and a classic for KMC. He also released another two hits “Kaya” and “Soca Bashment”. These three records began to establish him as a leading Soca artist.

“My first style was dancehall but I later started working on Soca. In 1998 I released “Bashment to Carnival” and I took off from there and labels started looking at me.”

In 2005 KMC formed his own soca band “Red White & Black” releasing some monster hits in Trinidad carnival that year. He released a song called “Soul on Fire” which caught the ears of Patrick Moxey of Ultra and Sequence records who then signed him and his career was on the upswing.

KMC has been considered a major influence in Soca music creating big riddims like the Voodoo, Drunk Man, Concubine, Party Alliance and Thunderbirds etc. He kept it in high gear when he released his debut album with Sequence Records “Soul on Fire” which ended up entering the Billboard Top 200. At that same time not only did his record do well but his native Trinidad entered the World Cup for the first time. 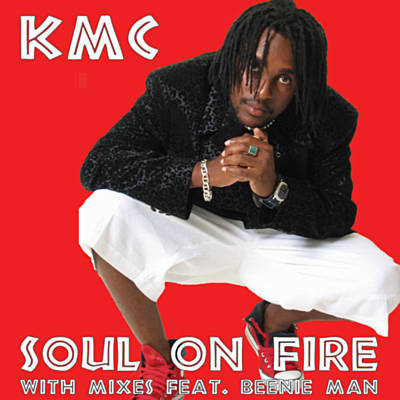 The single “Soul on Fire” also had a remix featuring dancehall star Beenie Man and American DJ, Fat Man Scoop. KMC also joined Beenie Man on his US “King of the Dancehall” tour. Besides being an artist he also produced tracks with other artists like Machel Montano, Bunji Garlin and also did soca collaborations with dancehall acts Vybes Kartel, Bounty Killer and Shabba Ranks to name a few.

From 2011 till now KMC has done over 25 songs with renowned producer Redone. His work with Redone landed him into the pop scene with a song called “Everybody Jump” resulting with a tour all over Europe. Recently, he has noticed the switch in the music scene and wanted to flow with the times. He is fulfilling a mission of creating a fusion of various genres like Pop, hip-hop and even a little Soca. For 2016 KMC already has an upcoming Pop/dance record about to drop called “Club on Fire” (https://www.youtube.com/watch?v=Rp00wPpTimU). His new management team Triple SSS Entertainment, has already hosted a video release party for the track in the swanky Manhattan club, Hudson Terrace.

The track is an upbeat, charismatic – floor banger that will have everyone dancing. Besides his own projects he is also planning to work on a musical collaboration with Chinese actress / singer Lady Long Long. KMC is determined to make 2016 and every year following it another stepping stone to his success. This New York based artist will soon have everyone dancing on the fire.