In a time where real talented musicians are hard to find some make a grand entrance. Native Canadian Andre Chrys has worked hard to bridge the gap between real talent and the wannabes. His work seems to be inspired by such legends like Bruce Springsteen and Bob Dylan.

Andre began his journey with his music when he traveled across Canada performing with various bands working the circuit. He played at different venues and festivals where he received the “on the job training” that any serious artist would require to succeed.

He soon took all this knowledge into the studio and came out with his debut album “Terminal Avenue” (2004). This was a big step for the Vancouver native. The album is filled with life experiences and the trials and tribulations that are a part of it. It is also peppered with creative characters that bring the project full circle.

Andre would keep performing in various venues and festivals after the release. One such venue that stood out for him was the 2007 Music West Festival. He has performed with such artists like the Watchmen and Junkhouse and more recently with acts like Dan Mangan, Tamara Nile, Ryan McMahon, and Cameron Latimer. An impressive lineup to share a stage with.

“It’s always nice to be a part of a large music event. There’s so much happening musically in the city all at once with festivals so they’re always fun to play at.”

His talented songwriting has not gone unnoticed. While working as sound editor he shared his music with one of the sound supervisors. It just so happened they thought one of his tracks would be perfect for a scene in the film “Kraken: Tentacles of the Deep”.

Andre would soon return to the studio and put together another impressive album entitled “Window To Nowhere”. This album would return with similar messages of love, loss and change. Yet this project was backed by his longtime band-mates Jeff Younger on guitar, Bill Briscall on bass, and Mike Magnusson on drums. The debut album was completed with session players. One of the more impressive tracks on the new album “Old Volvo” was inspired by a personal experience.

“Well there’s nothing like being rear-ended by a delivery truck to get some inspiration for a song about the car that saved your life. So yeah, personal experiences are a big part of my approach to songwriting. You can’t go wrong writing about what you know. That being said, I also hide behind characters in songs as well. Whatever ultimately works for the song.” 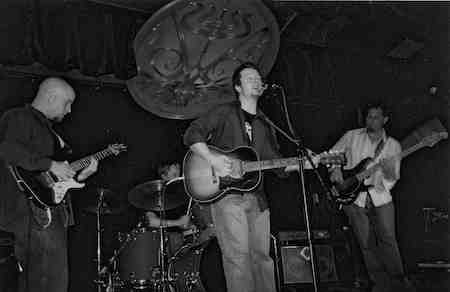 Most of the albums musical structure was inspired via his 60 year old Gibson guitar. That particular guitar has been an extension of Andre’s since he was 16 when a friend gave it to him. There are other hard hitting tracks like “Get Away With It” and “Don’t Disappear on Me” which will leave you wanting more of the breaking the door down licks.

Currently, Andre is set to pull out a tour in BC then he will be off to Nashville in 2016 and looking to perform overseas hopefully. His new project will drop on October 15, 2015 and is due to make a mark. As Andre would say pertaining to his new album ” It’s a heavy world, do your best to work through it” (http://www.andrechrys.com/).