Mimi Bonny: A Nutrition Expert and a Warrior rolled into one

“Believe In Better” is the tag-line that fitness guru and bodybuilder Mimi Bonny lives by. She is an exceptional individual that has not only competed on the bodybuilding circuit, was a contestant on America Ninja Warrior but a CEO of her own nutrition company.

She was first introduced to a gym fourteen years ago by someone she was dating. At first she saw it as a hobby which became an addiction then a way of life. Once Mimi realized she was genetically strong there was no stopping where she would go. At that point she discovered bodybuilding competition and decided to compete.

“My inspiration came from within. Discovering what I am good at was my motivation. Training for me is my coffee my drug.”

Mimi competed in three shows. The first one did not fair very well but for her it was a learning curve. She competes in what is called the Figure Division which she considers the most feminine division of bodybuilding that requires flexing.

For one competition she dieted too extremely which unfortunately landed her in a hospital. But she soon rebounded, learned her lessons, and was ready for more. She managed to nationally qualify and became a 2x National Qualified bodybuilder. Her goal of course is to go Pro. After you qualify you have one year to compete in the Nationals and if you win you become a pro bodybuilder.

She also won the National Transformation contest given by Hydroxy Cut Nutrition and Muscle & Fitness Hers Magazine. Her accolades are too many to mention. But her missions are many.

For example just recently she not only applied but became a contestant on the blockbuster show American Ninja Warrior. The way she ended up applying is when a co-worker suggested she give it a try. Ironically Mimi never knew the show even existed but with a little coercing she jumped into it. She was chosen out of thousands of other applicants.

“It was a difficult application. You had to explain your whole life in detail and send in a video showcasing your abilities. The producer saw my video and was liked my sense of humor. It was a phenomenal experience.”

At this point of her life she earned her Certification in Nutrition and soon put it to good use. All this time she was posting her techniques and food advice on her own YouTube channel. Soon she was receiving all kinds of comments and questions from her viewers. She then came up with a business plan to teach others the right way to lose weight without compromising your lifestyle. 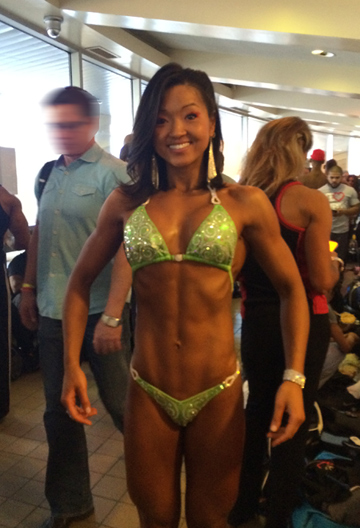 Mimi came up with what would be called “Eat Not Diet”. The premise of the plan is to learn how to eat what you like within a certain structure that would yield results. As she explains “there is no one diet for everyone”. She helps her clients on their eating styles and body type it is a holistic approach to weight loss (http://www.eatnotdiet.com/)

“I started my brand last year and posted videos on how to overcome obstacles on weight. They are all educational videos which through my viewers I created “Eat Not Diet”.”

Her business model is to open new avenues for her clients so they can develop their own strategy to eat properly along with enhancing all other aspects of their life. Besides her own YouTube channel (https://www.youtube.com/c/EATNotDiet) she is also on Footprint.tv which was founded by various media executives from such networks like NBC, ABC, FOX, CNN, Disney, Universal Studios, ESPN, NHK TV Japan, ARD German TV and an Emmy Award winning producer.

On top of all this success she recently landed a channel on Huffington Post’s new digital video network, Outspeak. She met the criteria to be on actual Huffington post platform.
http://variety.com/2015/digital/news/huffington-post-outspeak-broadbandtv-1201515258/ . Mimi is a trailblazer and a force to be reckoned with. Her natural energy and drive is something to experience. She is a true motivator and a warrior out to conquer every goal placed before her.