Brooklyn born artist Samuel Claiborne, who now resides in Hudson valley in Rosendale NY, has done it again with a fresh new album that shatters the social fabric. Samuel came up during the music boom of the 80’s and gravitated towards what was termed the “No Wave” scene. Back then such acts like Blondie, The Ramones, Frank Zappa and The Talking Heads were taking the industry by storm. These were some of Samuel’s influences.

“The scene was chaotic and rich and crazy, and a lot better than the alternative (disco). Not a lot of pretension, just people in it for the love of music. It’s a shame that the club scene died – I don’t know if NYC will ever have the combination of CBGB’s, Danceteria, Mudd Club, Max’s etc. – it was a magical time!”

Yet Samuel at first was drawn to poetry not music. Publications like Northern Light, Halfmoon Review and Belle Fourche have showcased his work. Recently his poetry appeared in The Chronogram, Voices of the Valley and Riverine anthologies of Hudson Valley poets. In addition his essays have been published in the NY Times and the
Phoenix and broadcast on Northeast Public Radio.

It was not until 1978 that the musical root was planted when his stepbrother Jan Stacy invited him to join his band. He was eighteen at the time and has cherished that first invite into the world of music. He never received any musical training; He was self-taught and to this day does not read music.

As he followed the musical path with his stepbrother he performed with such bands like The Wolves, the Poorboys, and Fear of Art. The most memorable band they performed in was with Peter Ford called Things Fall Apart. They did everything from punk and reggae to blue-eyed soul, all original material. Samuel even played what was called a ‘zefalator’ a slide whistle invention composed of an alto recorder mouthpiece mated to a bicycle pump, through a Memory Man echo.

When his step-brother was stricken with AIDS Samuel progressed on his own. He did some experimental music for a while with Jennifer Lowman as Loons in the Monastery. Samuel also took on the role of an agent provocateur/noisemaker in the Indian/Jazz Fusion group Clear Light Ensemble. His musical resume is extensive as he recently played with bands like post-rock duo B.B. Rebozo and will be performing with Tomás Doncker.

Tragedy hit Samuel when he was in a terrible accident in 1992 but he found inspiration in the smallest of things to recover.

“I am very lucky in that I love life, and find inspiration, awe and joy in the littlest things, like lichen, clouds, the moon. Nature, sex, sensuality, creating, these are wellsprings that have never left me – the Muse is everywhere.” 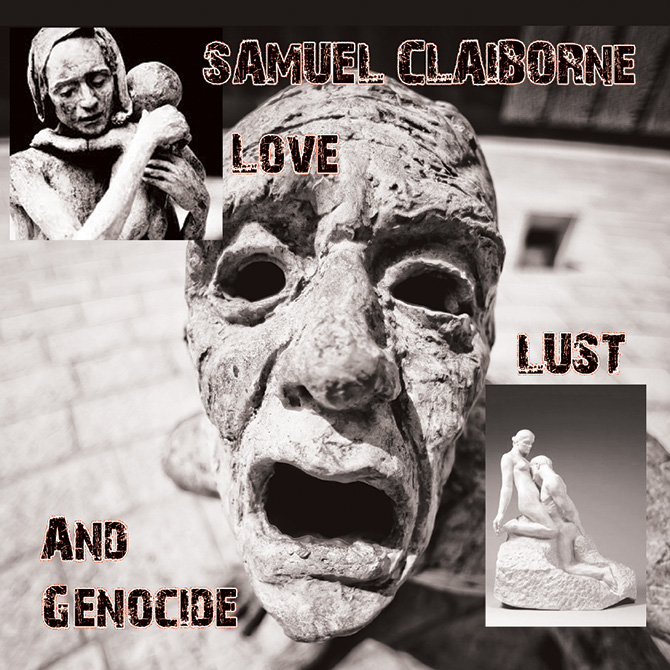 His new album “Love, Lust and Genocide” (https://soundcloud.com/samuel-claiborne/sets/love-lust-and-genocide/s-uu7rd) strikes a psychological nerve as it weaves through the trials and tribulations of life. As an idealist Samuel tries to highlight the many mechanisms in today’s society. Whether it be outrage, engendered by injustice, cruelty, greed, racism, sexism, fundamentalism of all stripes, and even tiresome political correctness. He likes to be honest in his message and talk about issues that really matter.
A good example is the track “21st Century War” which envelopes what every one seems to seek but do not really want to admit.

Samuel, who is a former quadriplegic, has not allowed any obstacle to hinder his love for the arts. At present he is hoping to perform around the world and connect with other musical cultures and enhance his palate. Aggregations such as the Israeli/Palestinian orchestra and other groups that traditionally do not perform side by side due to political correctness are a great source of inspiration to him. His work has also earned him the New York Foundation for the Arts grant/fellowship in 2009 for “The Annunciation”, a CD of piano improvisations.

“I’d like music to really become a dominant force for decrying social injustice and uniting the downtrodden, for fomenting justice.”

Strong words from a talented artist who has put his money where his mouth is. Samuel is an artist whom everyone with a desire to express themselves should follow.