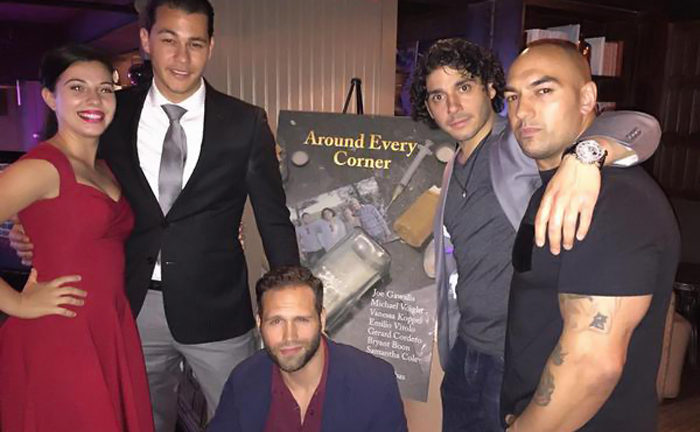 Determination and ambition can be a lethal combination but when placed in the right order it can be rewarding. For east coast born, Joe Gawalis, that would be the case. Joe has been a lover of film making since a young boy. He marveled at the perfections of Martin Scorsese and the imagination of Mike Newell. These and many others inspired Joe to follow his dream to direct his own project.

His first steps into the industry was as an intern at a public access channel in New Jersey. By the time he was 21 he was in full swing handle all aspects of production from pre-production, shooting the shows, all the way to the editing room. This led to his internship for !Live with Regis and Kelly on ABC. There he was dealing with high level celebrities on a regular basis, and assisting top producers with their daily tasks, tools that would assist Gawalis to this day.

“It was an amazing experience, interning for a small company that works with public access television allows you to really get hands on experience in television production. I was the one operating the cameras, setting up the lighting, helping with the editing and learning how a production is formed from concept to distribution. Being a part of each of those stages taught me the fundamentals that still help me to this day.”

In college he studied television and film. The university he attended had all the equipment necessary to prepare him for the real world. His first attempt at a project was when he was 19 doing a 90 minute action film he wrote. He used a two camera shoot with elaborate fight scenes and a whole ensemble cast. It was an ambitious undertaking for the young 19 year old, one that could only be seen through the eyes of young ambition with little experience. Though the project only made it to about 20 minutes in run time the experience and understanding of what really went into a set would be invaluable.

Joe turned his ambition towards directing a few short films and videos while honing his skills. He also earned some awards for his work. This inspired him to open his own company specializing in Corporate videos, legal videos and industrial videos. Joe’s work would soon pay off when he won best picture, best short, best action actor with Gerard Cordero and best Film Fight Choreography (Hector Soria) for a film called Nostre Realite in 2013. This was at the Urban Action show case sponsored by Cinemax.

The creative juices were flowing and Joe developed his own TV pilot called “Precipice”. The film is a powerful tale of a man’s struggle to escape his criminal past amongst his closest friends. Yet in their world nothing is sacred and everything could be taken at any instant. The film stars upcoming talents like Gerard Cordero, Bryant Boon, Joe Gawalis, Bek Markas, Bobby Guriano, Maria DeSimone, Jamie Josephs, Ralph Bracco and Rob Byrnes. The pilot was shot in 2012, and it is a project he and the team would love to return to in the near future.

Soon his work would be noticed by others in the industry. Such talented individuals like Michael Madsen, Al Sapienza, Luis Antonio Ramos and WWEs Bret “Hitman” Hart have shown interest in working with him the upcoming project “Memoirs from the Streets of New York”.

Currently, his film “Around Every Corner” has made some inroads. As far as Joe is concerned it is one of his favorite projects so far. The production took seven months to complete on a shoe-string budget but has made some heads turn already. It was recently released on Amazon Prime, Amazon Video, iTunes and Vimeo on Demand. This film is a very emotional roller coaster that follows the life of a drug addict who is reconnected with his family on the third anniversary of his parents’ death. It has gained such notoriety that many drug consulting groups have planned to use it as a tool to help addicts. In turn many addicts have extended their appreciation to Joe for exposing what they go through.

An amazing opportunity was presented to Joe recently he was interviewed by Fox GoodDay anchor Antwan Lewis about “Around Every Corner” and he loved it’s message. This was huge feather in his cap after all the work he has done. Recently, the film also was nominated for 6 Awards at the North East Film Festival. Joe was nominated for four of them; Best Screenplay, Best Lead Actor, Best Director and Best Feature ( https://youtu.be/eV2SQrk0AWQ)

Joe has a solid line up of projects upcoming. His first would be the production of his next film “Memoirs from the Streets of New York”. Then he is working on a TV pilot title “The Good Neighbors” which will be a dark comedy and a documentary with director Frank Calo which will be shot in Panama. Also he was recently cast in the film “Neverland” written by Erik Wanger and directed by Steve Rahman. Joe Gawalis’ ambition and determination have become a force to be reckon with. He is due to create some interesting gems one take at a time.