To be born with a talent is one thing but to take it to the next level is another. Australian born, Melinda McCarthy has done that and more. Ever since being a small child she was always in the middle of a mini-project of her own. Her parents were her biggest fans and supported her in every way.

Melinda would follow her dream of being an artist and completed a degree in Screen-Print & Design. This led to her being hired at RedPlanet which was a screen printing studio. Yet the studio closed and she found herself returning to painting. Her return to painting opened the door some studio space with fellow artists. Melinda ended up collaborating with international artists and this experience helped her hone her skills.

As an artist she has not limited herself to just painting but also pencil illustration, screen printing, some photography and film, and installation. In addition she has worked on theater sets and has done some textile and costumes. And just to add to the fun she also plays the double bass.

After completing her studies in 1997 she took part in her first show which set the stage for more to come. Melinda would soon travel to many parts of Europe until settling in London. During her travels she played in a band with her double bass and took part in any art exhibit she can show her work.

The double bass playing presented itself to me and I just went with it, taking me touring and studying all over the place and giving me a bit of a travel bug. Once traveling (whether with band related stuff or just for the sake of it) met many people and ended up living in London for a while giving a base for me to exhibit there and in Europe. Shows have been a mixture of planned and just going with what is offered or stumbling across opportunities. Basically just staying open to possibility.

For a first timer Melinda’s work would border on the uncanny and mythical. Her father tried to interest her with books on the Impressionists but she was drawn to a book on Hieronymous Bosch. There was a book her sister had that also grabbed her attention by Brian Froud. Melinda and her sister were adopted and they seem to relate to the sense of mystery as was their adoption. This combined with traveling to classical locations and hearing fantastical stories planted the seed. Many of these experiences coupled with her dreams are displayed in her work. Oddly enough even with all this mystical aura the music she listens to while painting does not fit. She can go from the Beatles to Eastern European folk to classical to hip hop!

Melinda has gone on and won awards at a few of her shows. At the Greenpoint Gallery she won first prize which earned her a solo show. Her second award came from the Anglo-Italian Academy of Art, at the
Chianciano Museum of Art in Tuscany Italy. The first prize was a welcomed honor as Linda Scott was the judge. In Italy the panel there consisted of esteemed scholars and notable individuals in the art world. 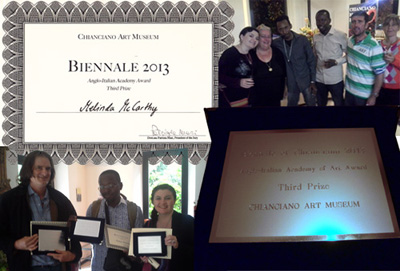 Her most recent show was at the Studio Vogue Gallery in Canada. Even though she only had a few pieces on display the response was very positive and the media attention was a plus. Currently, she is gearing up for a new show at the Umbrella Arts Gallery from June 18-25th. The show is entitled ANCHORETA. The term is used to describe anchoresses and anchorites. These type of people hide themselves in a small room to dedicate themselves to their faith in God.

I found it so fascinating that so many people chose this life all the way up to the 14th century. Mostly women and it had such an impact in their time yet you do not hear much about it now. The stories of their visions, experiences and philosophy behind the lifestyle inspired so much imagery in my mind I researched it further and put together this show. It is a solo show and here people can expect to see a whole new body of paintings as well as some illustration and installation to create a bit of realm for people to really grasp the lives these people led.

Melinda has adjusted well to NY coming from Australia and has enjoyed every moment. The hustle and bustle has been a welcome experience compared to the laid back way “down under”. Her show is due to be an eye-opener one you do not want to miss. To learn more about upcoming shows just visit http://www.artofmelush.com/.