The new book penned by acclaimed journalist George Anastasia offers us an inside look of the John Gotti Sr. and Jr. the public never knew. Behind the sensational tabloids and “celebrity status” that the Gotti’s savored they were actually self-serving vindictive individuals. The inside information comes from someone who was John Jr.’s shadow. That person is John Alite who was not only Jr.’s shadow but his personal security guard.

John Alite’s candid reporting in this book is a true eye-opener from the first page to the last. The book chronicles his life as a young man on the right path but soon is drawn into the “life”. He gives us all the details sometimes gory and unforgiving as he paved his way to the top. Then he meets John Gotti Jr. and his street life takes on a whole new twist. But as he builds a reputation of not only being violent but intelligent he realizes the hypocrisy that is the Gotti name.

“When I was younger I dreamed of being involved in sports. Maybe coaching or going back to school. But I wasn’t scholastic material so I took the easy route. Yet now I would like to help kids build their confidence.”

First off being Albanian from the area of Queens, John came from was a rarity. But he blended in with the Italian criminal element easily. He had the looks and the balls even more so than some “made” guys. John eventually started to work for the Gambino family and began to climb the criminal ladder.

As the reader you discover how John learned how to be one step ahead of the other guy. This is what kept him alive to this day. Author, George Anastasia formulated the story in such a way that it gave you a clear visual of John’s life experiences, from his times on the street to his inhumane incarceration in Brazil’s harshest prison, Ary Franco.

“I wrote three letters to the American Consulate that I was going to kill the Warden before he kills me. I told him when we had a meeting in his office that I will kill him and I know where he lives. Just so he understands where I am coming from. I really knew where he lived. We had money that’s what made the difference compared to other Brazilians.”

He was the Gotti’s go-to-guy for all aspects of their business. As John illustrates for us in the book all the so-called mafia rules were broken daily by the Gotti’s. From having their women make public comments to dealing drugs when they threatened others with murder if they did. It was hypocrisy running rapid. He also explains that they eliminated Paul Castellano because of the drug business. 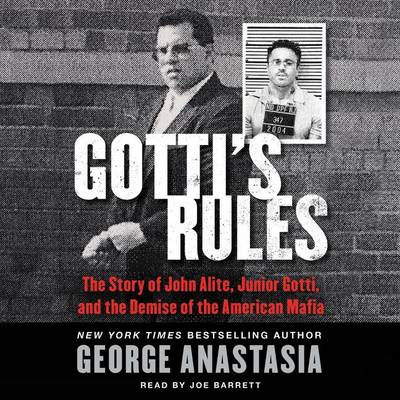 John even gave us inside information. When John was on the street John Sr. did not approve of Alite getting too friendly with Sammy Gravano. He was worried that their friendship would threaten his position. He was 22 at that time and Sr. warned him not to get too close to Sammy. At the time Alite did not know why Gotti Sr. said that. Yet he realized later that he possibly wanted him to eliminate Sammy. A similar conversation arose in 1990 as well. Besides that John Sr. use to mention to Michael “Mikey Scars” DiLeonardo that Alite was his personal hitman. When we asked Alite and George if the mafia is on life support or not they offered their thoughts.

“The mob is re-inventing itself. Gotti Sr. has become the poster-child of what not to do. Guys who follow his example like Vinny “Gorgeous” Basciano are giving themselves a death sentence. That nonsense is for “George Clooney” on MTV. The mistake the mob did in 1985 and not the young guys but the older guard should have agreed to whack him but they did not. I have no respect for anyone who claimed to be tough but never put a gun in his hand and take someone out.”- John Alite

“I think the American Mafia is in trouble and bringing in new blood to re-invent itself would make sense. The problem is that today the best and the brightest in the Italian-American community are doctors, lawyers and educators and the mob is scraping the bottom of the gene pool. A guy like Nicky Scarfo in Philadelphia or John Gotti Sr. in New York probably wouldn’t have risen to the rank of mob boss in the 1940s or 1950s. They were thugs and leg breakers, but not leaders. The fact that each became a boss says a lot about the deterioration of the organization. I’m not sure the American Mafia, even with new blood, will ever again be a major factor in the underworld. It will always be a part of the underworld, but other ethnic groups now seem to have a bigger role.” – George Anastasia

Even though he survived the Brazilian prison in Ary Franco he does make it clear that if he was 16 and went in, he would have never have made out. His experience in other prisons ironically mentally prepared him for the hellhole he endured. He paid his dues in the prison only to be ratted out in the States by many fellow wise-guys and by John Jr. himself. This fact, as the book illustrates was the turning point for Alite. “Why should I honor the life when these guys just put another nail in my coffin?”

The public and others point fingers at Alite calling him a rat. But he explains that the one’s pointing the finger ratted him out first. The loyalty was breached before he ever thought of doing such a thing. In his mind when men like Ronnie “One Arm” Trucchio and John Jr. offered information on Alite all bets where off. He sacrificed his life for them and they turned their back on him. Basically for Alite there was no other choice.

“Gotti’s Rules” is not what many think it is. It is not “a 320 page rant from John Alite” but an inside look at how the Gotti family worked their way into the mob and into the hearts of the public. George was notified by John Alite about working with him on a book about his life and times with John Gotti. He jumped to the opportunity since he never worked on a story surrounding the New York underworld even more so since this story had a twist with the informative John Alite.

“Alite doesn’t try to sugarcoat or explain away what he did or who he was. I think Gotti Jr. is still trying to glorify his father and justify his own existence. It’s fantasy, not reality. The same issues arise when you look at how Gotti Jr. has tried to explain away his attempt to cut a deal and cooperate with authorities back in 2005. He can say all he wants but the FBI memo reproduced in my book lays it out very clearly. The reason I presented the full text of the document was to let the reader see for him or herself what the session was about. Gotti Jr., of course, is still spinning different versions of the event and its meaning. A basic question for him is this: What would your father have said or done to another mobster who sat down with the feds the way you did? Do you think you could have explained it away to him the way you’re trying to explain it away in the media?”

Based on the violent reputation Alite has, many would think George took a chance at meeting with such an individual. But George has worked with other “ex-mobsters” and was in the least bit worried. This is obvious from how the book came together a definite eye-opener for anyone looking for truth and conviction. To keep up with John Alite visit http://johnalite.com for more updates.