Comedy is sometimes considered the healthiest type of medicine and for most folks it is true. This theory has been the backbone of many comedians when appearing in public. The art of comedy was first utilized in theatre in Ancient Greece. It comes as no surprise that internationally recognized comedian Basile just happens to be Greek.

Basile fell into the comedic arena by accident it was never his life long dream like many others. He was raised in a strict home on Long Island, and being an only child was somewhat spoiled. But he always had his eye on the importance of a solid work ethic. As a young man he loved sports and was hoping to become a pro ball player. Yet that dream was sidelined with an unforgiving injury.

He decided to tackle the law and venture into being a lawyer. Basile was working in construction at the time and was not ready for extra education. But that changed when he decided to go back to school. He would attend Cleveland State University then Case Western Reserve for Law. Yet like many things in his life even that got sidetracked when his mother fell ill.

Basile tended to his parents needs while working as a legal administrator in Cleveland to keep the home afloat. As pressure mounted, his cousin Mike took Basile to a local comedy club to give him a moral boost. Here is where the comedic root took place. His cousin dared him to go on stage since Basile thought he could do better than the comedians they saw that night. Basile took up the challenge and ended up starting his career as a funny man ever since. He first began with other open mic/ amateur comedian partners like Steve Harvey.

He has taken his stage act around the world making Greeks and non-Greeks fall off their chairs. His career started in 1990 and he has not looked back making crowds forget their problems one stage at a time. Basile’s core fans are two fold; Greeks and non-Greeks but he has wowed the English speaking audiences just the same. His popularity grew with the release of his critically acclaimed series, “Growing Up Greek in America” which drew a great response and to date has sold over a million copies worldwide. His talented voice and character has been aired on Armed Forces Radio, Television, and Syndicated Radio as the voice of: Bullwinkle J Moose for Universal Studio’s, an array of Japanese Anime shows, “The God Father Of Soul, James Brown” in North America, and his comedy segments on XM/Sirius Satellite Radio just to name a few…

He just recently toured Europe and Australia and found the reception not to different in any country he visits.

“It’s the same jokes but there are commonalities that work for all different countries you play. But you have to be aware of some differences. You need to do your homework with their certain culture. Most of the crowds in Europe are trilingual you have to be aware of that and tie those in for your jokes to work. I use to work in the government and I picked up Russian. I have a food company in Quebec where I picked up some French. They react the same way they get the comedy. I prefer not to curse in my Greek shows. You get all ages who come to my show, as well as clergy coming to my shows and laughing, even though there could be four generations of the same family and laughing at the same joke it’s amazing to see.”

In many of his shows he pokes fun at his family members mostly his grandmother (Yiayia). This strikes cords in any audience who was brought up by an old fashion grandparent. It is universal no matter how you cut it. Basile prides himself on how he does not depend on curses to make a joke. Even more so he banks on his mannerisms and facial expressions which cause more laughter than his jokes.

“My expressions and body movements have a lot to do with and to who I am on stage. I am very animated, I’m a reflection of what the public may do themselves. This brings tears of laughter because they shake their heads saying, “Hey, I do that also.”

We asked Basile of his take on the late film “My Big Fat Greek Wedding” since it was a Greek comedy. He loved it and noticed how non-Greeks gravitated to it since it touched upon a bit of every culture. Not to mention the impressive acting that went on across the board. One of Basile’s wishes would be to work on a project with Nia Vardalos. He has managed to appear on TV at least one hundred times from HBO to the The Tonight Show With Jay Leno. Basile was also nominated for an EMMY for his work on ESPN’s “30 for 30” series segment, “The Legend Of Jimmy The Greek”, as the voice of Jimmy “The Greek” Snyder (Syionidis) in 2010. 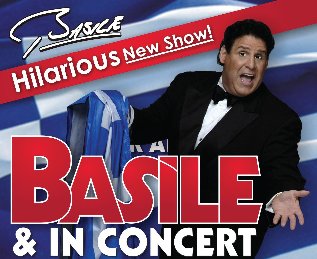 Currently, Basile is on tour in the US and Canada making his stop on his old turf Long Island, NY. He will be performing on January 23, 2015 at Holy Trinity Church in Hicksville to a sold out crowd then head to Denver the following night. He is excited about going back to Long Island once again. Basile moved from NY with his family to Cleveland then married and went to sunny North Carolina.

Also on the plate for Basile is a TV show that is based on both his Greek and non-Greek shows that will showcase his comedic character for iTV, High Noon Productions & Butterfly Productions. He could not go into further detail but he expects it to be a success. He’ll be busy filming this summer in Cyprus and Greece as well. Basile is a driving force that is not slowing down anytime soon keep up with this comedic genius at www.OpaBasile.com and www.4Basile.com and if you’re hungry check out his food site! www.BasileFoods.com