If you’re looking for a smartwatch but don’t want a huge screen sitting on your wrist then the Martian Notifier might be the one for you.

The smartwatch pretty much looks like a regular watch. It’s simple but stylish and comes in three different colors: black, red and white. It connects to iOS or Android devices over Bluetooth. The damage? Not bad, at only $129.

For the most part it’s comfortable, and alternative straps can be purchased, including leather and stainless steel.

As the name of the device suggests, the Notifier is all about getting notifications straight to your wrist. Therefore leaving your connected device in a pocket, bag or wherever you like to keep it.

Text and icons appear and scroll along the small OLED screen on the watch face. It’s not exactly high-res but does the job.

As well as texts and calls, you can get all kind of notifications – pretty much anything which is installed on your companion smartphone or tablet. You can pick and choose which come through to the Notifier via an app so it’s not all or nothing.

There’s an LED notification light and on top of setting the intensity of the vibration, you can create patterns for each type of notification. If you do miss one, a simple double tap on the glass front recalls you last notification but only up to 5 minutes after it came in.

While the Notifier does a great job of providing information to your wrist while looking like a regular watch, it can perform some other tricks – some of which we weren’t expecting.

Pushing the top button will activate voice control on your connected device, there’s optional weather information, you can use the LED as a flashlight and find your phone if you’ve missed placed it by making it sound an alarm.

The most handy and cool feature is being able to use the Notifier as a remote shutter for the camera on your companion device. Tapping the button sets off a three second countdown.

Most things are controlled by a free app which you download to your smartphone or tablet and everything is pretty straight forward here.

Battery life is decent for the Notifier with our tests resulting in an average of around a week. You will need to charge with the supplied cable though as the microUSB port is set far back into the watch housing.

Cleverly, the analogue watch part runs on a separate battery and this won’t run out for a couple of years. 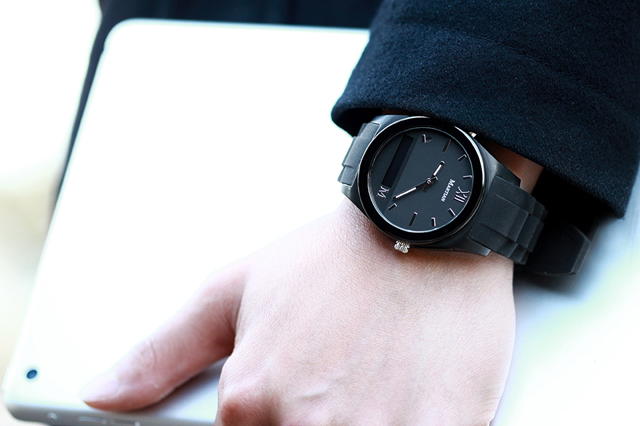 The Martian Notifier is a great choice for those who want a smartwatch within the design of a regular wrist watch. It’s affordable but stylish, and plus, its main skill is notifications but the additional features like remote camera control are handy.

Check out the watch in real time, as reviewed by our colleague Christen at Divas And Dorks (video produced by Avenue 1 Founder Chuck Holliday)