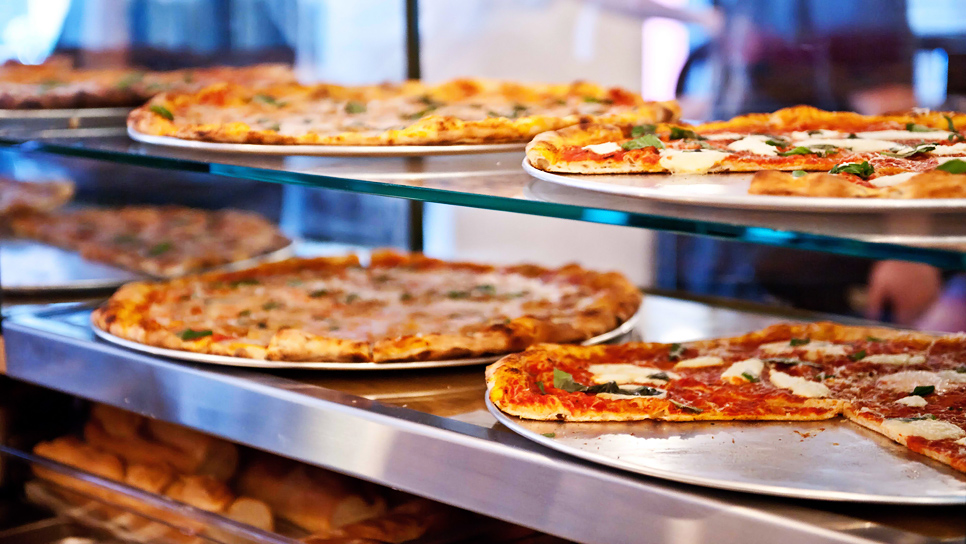 New York City is a tough market for restaurants — there’s an 80% fail rate — so even more props to these guys. It’s nearly impossible to duplicate the old-school pizzerias nowadays, since brick coal-ovens can only be rebuilt or replaced. When a pizza parlor has been around for decades, you know it’s got to be good.

Lombardi’s (32 Spring St, Manhattan) – Established 1905
American pizza in general, and New York in particular, owes a lot to Lombardi’s Pizza, first opened in 1905 in Little Italy, Manhattan. Gennaro Lombardi was granted the first mercantile license to sell pizza in New York. Lombardi’s is credited with the revolutionary use of the coal oven, and set the standard for selling pizza by the pie rather than the slice.

Lombardi’s, however, is not the longest continuously operating pizzeria: in 1984, Lombardi’s closed for a decade, reopening under the management of Lombardi’s grandson and his friend, John Brescio. Brescio said the original closed after not being able to survive economic downturns and a crumbling oven. Nowadays, Lombardi’s doesn’t have to advertise.

John’s of Bleecker St (278 Bleecker St, Manhattan) – Established 1929
John Sasso, an immigrant from Naples and another pizzamaker for Lombardi’s on Spring Street, sprang for his own coal-oven pizza place in 1929. John’s became a pizza mecca in its own right, though it kept the tradition of no slices, and it’s still cash only. John’s stayed open through the Great Depression, and hasn’t slowed since.

That security comes from a combination of factors: reputation, star power (Danny Devito and Vanilla Ice are just two of the celebrities with their pictures on the wall), good prices (“You and I come here and can eat and drink for less than $20″) and a classic pie that can only come from a well-made 800-degree brick oven. 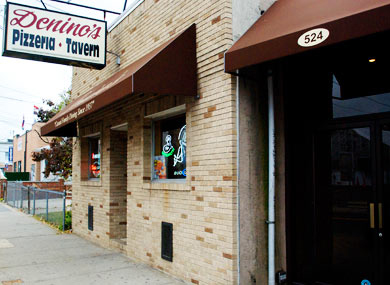 Denino’s Pizza (524 Port Richmond Ave, Staten Island) – Established 1937
Cross the Verrazano Bridge or take the ferry to reach the borough outpost that is Staten Island — it’ll be worth it for Denino’s alone. Opened first as a tavern in 1937, Carlo Denino introduced pizza to the family-owned restaurant after World War II. Like other pizzerias of the time, Denino’s pizza used a brick coal oven, producing New York-style thin crust. The sausage pizza in particular became a hit.

Despite being out of the way for many mainland New Yorkers, Denino’s made a trip across the river not only acceptable, but necessary. According to Denino’s website, they have been visited over the years by actors, mayors, borough presidents, and New York families again and again. At the end of the day, their quality product is what sustains them.

Arturo’s Pizza (106 W Houston St, Manhattan) – Established 1957
Arturo’s was started on $3,000 of borrowed money by Arthur “Arturo” Giunta and his fiancée, Betty Keefe in 1957. The Village locals pieced their restaurant together over the next few years, following in the tradition of the great pizza places of their time by using a brick coal oven and only selling by the pie. Arturo’s 900-degree oven put out crisp crusts that drew the likes of Dizzy Gillespie and Julie Roberts to its plush booths.

Giunta passed in 2006, but his underdog pizzeria — which doesn’t get as much press as the older coal oven spots — lives on. 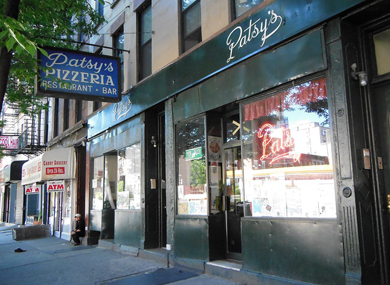 Patsy’s (2287 1st Ave, Manhattan) – Established 1933
Spanish Harlem — El Barrio — became home to one of the oldest pizza places in New York City (at one point it was the oldest running pizzeria) in 1933. Patsy Lancieri learned his “paper-thin crust” craft in Little Italy — another disciple of Lombardi’s — before opening his own uptown joint. Unlike other pizza godfathers, Patsy sold his pizza by the slice. Patsy’s became Frank Sinatra’s pizza of choice: the singer had pies flown out to him in L.A.

Patsy’s was bolstered in later years by legendary pieman José Jiminez, a maestro with the coal oven until his death in 2009. Some say that quality has since slipped. In the 1990s, the original Patsy died and the name was sold to Albanian Frank Brija, who has since opened multiple Patsy locations and gotten himself embroiled in a lawsuit. It’s said that true Patsy taste can still be found at the popular Grimaldi’s in Brooklyn.