Long Island now has adopted bragging rights as the new spot for a Comic Con in New York. It may not be bigger than the Javits Center or longer but it packs a superhero punch. LIB visited the Convention on Father’s Day and was duly impressed. As a comic lover myself I placed it under my critical eye especially since I attend the Jacobs Javits Comic Con every year. It passed with flying colors from its various vendor tables to the Jedi Knight performance it was full of everything a “geek” would desire.

The event which is located at the Cradle of Aviation in Garden City is perfect for any Long Islander. It is in a central location with the parkways nearby for easy access. Besides the convenience the admission does not “knock you over the head” at $2o for adults $14 for kids. If LIB was to estimate the amount of attendees there must have been hundreds roaming the three floors of fantasy.

“It is great that they thought of this. I love attending the Jacob Javits Comic Con but this is so much more convenient and less expensive,” said Captain America (Nick Fields).

Folks like Nick came in costume to honor the event. There was Batman, Black Widow, Super-Girl, Deadpool and many more taking time-out for pictures for all the young fans. Besides the super-heroes there was a large contingent of Star Wars characters that seemed to dominate the Con. LIB had the pleasure of meeting one of the Jedi performers, Andrea Lombardo who offered her take on the Con.

“It is my first time at Eternal Con and its going real well a really great experience. Especially for families as I see many kids running around. The atmosphere is electric and is one of better Con’s I have been to.
I got involved with Empire Saber Guild about a year and half ago after watching their show in California. My fiancé and I inquired about bringing it to New York and here we are. We put on twenty minute shows for all kinds of events.” 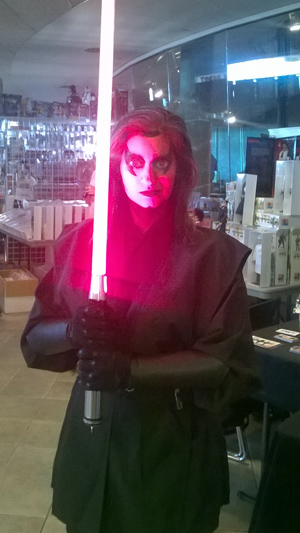 Each floor offered a different theme from regular vendors on the first two floors to an art show then the third floor with celebrity artists. On the third floor we came across the creator of Eternal Con Frank Patz who offered his words on this “brain-child”.

“Long Island didn’t have a Comic Con and coming from an events background I felt we needed one. So I put it together last year for the first time and we ended up having 3000 people attend. The complaint we had is we needed another day. We are pop culture show more focus on film and music but a lot of comic fun to go around. If I wanted to add something more it would be one more day.”

As for yours truly the event was fun and exciting filled with anything a comic or film lover would desire. If you are any one of those be sure not to miss it next year with new surprise’s to be announced.

Key Things You Should Know After Turning 30

How to Look Fantastic While You Are On the Go