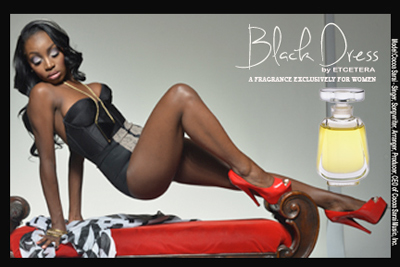 “This is what I smell when I close my eyes and think of you. You are what every man wants and what every woman should possess…you are my Black Dress” is the Black Dress opening line and one of the most intriguing statements that any fragrance has made. Black Dress Fragrance was the concept of Grammy recording artist Etcetera, who’s’ credits are extensive. This hip hop artist or what Billboard labels rhythmic pop star is a ghost writing, sports manager, philanthropist, television musical director, but will always be a recording artist first and the fragrance is just a way show appreciation to his new found female fan base. Releasing a new project in 2014, Etcetera wanted to bring out the fragrance to accompany him and his new venture on his journey. This fragrance unlike the others, sponsored by his musical counterparts is conceptual. Etcetera wanted to have a concept behind his fragrance. Black Dress is marketed to showcase women of motivation and purpose. The Team at Black Dress hand picks all the “models” for the fragrance to ensure that they embody the motto. I sat down with both, Etcetera and his Chief Operation Officer, Mr. Anthony Donald to go more into depth about the fragrance that was chosen to be the exclusive fragrance sponsor for fastest growing international fashion exhibit throughout the world, 2014 D.C. Fashion Week.

NC: How did the concept of a woman fragrance originate from?
AD: The idea of the fragrance came from the desire to find an appropriate item that would express the gratitude that Etcetera had to his current and new female fan base.

NC: Why a woman’s fragrance and not a men’s cologne?
Etcetera: Because women have been my most loyal and highest supporters, but the male cologne is coming soon.
AD: The fragrance for women just came as a good fit, dealing with women on all levels of the industry.

NC: Since the launch of the fragrance how has it done it way of sales?
AD: Since its original launch and being new to the fragrance world we have been very blessed and successful. The new launch is to new to know how it is doing but we are having remarkable positive feedback, especially with the new campaign.

NC: The image you portray is a bit of contrast to the other Sean’s (P Diddy and Jay-Z) which you seem more positive and laced with a desire towards empowerment. Would say that is accurate?
Etcetera: Everyone’s focus is different. I cannot tell you what drives their fragrance motto but Black Dress is about the empowerment of women, from a male perspective. I grew up with women all my life and being raised by a woman, there are certain aspects of a woman you learn to appreciate. So when the fragrance was being designed I wanted to turn those attributes into scents and came up with my perfect woman.

NC: You have work with a tight team on the “Black Dress” project. People like Rochelle Leanne, Angela Rivera, Cocoa Saraii and Nancy Vazquez. Can you tell us how this team came together?
Etcetera: These initial four women were hand chosen because of their passion for their crafts. When the campaign of Black Dress was being redesigned, my idea was to find women that embodied the concept. Black Dress represents strong women of character, woman that are driven and that strive for success without compromise. These women personify that to me. Not only are they friends of mine, they are also business woman who are focused on their goals, determine to see their dreams become reality and still take the time to be women. The business mogul, the physical training, the artist, the CEO of her own record label and the film director all encompass the image of Black Dress.

NC: Where can this fragrance be found?
AD: Currently you can purchase the fragrance on our website http://www.blackdressfragrance.com and at selected stores in the Delaware, Maryland, Virginia and Washington D.C. areas with more locations to come soon.

NC: Will there be male version of the fragrance put out as well?
AD: Most Definitely 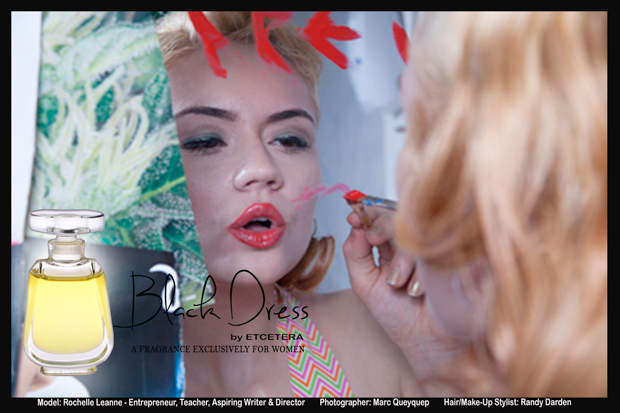 NC: How else are Etcetera and the Black Dress team going to build awareness for the fragrance? Are there any new plans ahead to promote it?
Etcetera: Since I have a new anticipated recording project being released in 2014 I will promoting my project nationally and plugging the Black Dress fragrance in the process. In additional any event or project I do or am involved with will be co-sponsored by Black Dress.
AD: Not only will Etcetera be promoting but the Black Dress dream team headed up by me and our Director of Product Development Anastasia Alexandratova will make a huge positive impact. We have developed an unconventional effective marketing campaign to position Black Dress Fragrance in a contending spot. This, also with the help of our colleagues, co-sponsors and our beautiful woman ambassadors of Black Dress is a great added power push. We are determine to make sure that “Every woman has a Black Dress”
So in all Black Dress Fragrance seems to be well received and gaining creditability rapidly. So judging by the enormous amount woman that visit the Black Dress website and the overwhelming response to this fragrance in our studio alone, they may make their quote a reality… “Every Woman Should Have a Black Dress”