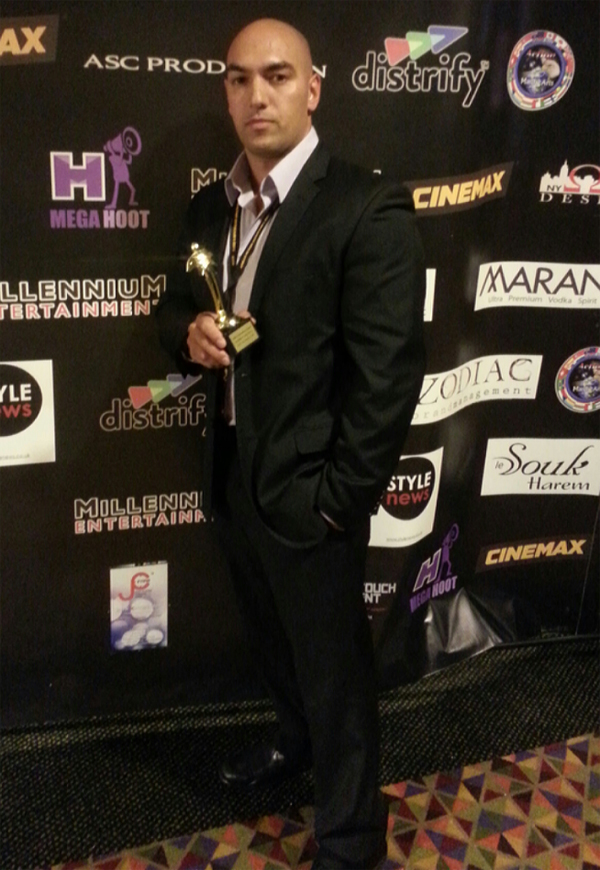 Who is Gerard Cordero? Gerard Cordero is what you would call a “man of many trades” who has managed to bridge the gap between acting and martial arts. At twelve years old the “acting bug” took root and his love for entertainment was sealed as he watched his idols like Sylvester Stallone, Patrick Swayze, Eddie Murphy and Tom Cruise act on the big screen. Watching these talented mega stars helped Gerard to develop the courage to start performing before crowds.

Gerard has studied various martial arts styles for the past twenty years off and on. Shotokan being his first, and then going onto other styles like Goju-Ryu, Taekwondo, American Kick-Boxing, Muay Thai and Jiu-Jitsu. In addition to studying in all these styles of martial arts, Gerard was also a very well rounded competitive Greco-Roman wrestler as well as a gymnast.

Without knowing, all these fighting styles/techniques only benefited him in the roles that he would fill later on when he took on the acting game. Even though he had no formal acting school training, he did study acting in College and with an acting coach.

He was “baptized” in the industry in 1998 on the TV mini series “Witness to The Mob” that featured heavy-weights like Vincent Pastore and Tom Sizemore among many other known actors. This experience had set the tone for Gerard’s future projects to come.

“It was very overwhelming. You throw in talented actors like Tom Sizemore, Vincent Pastore with a list of other known talent, I didn’t know what to expect. All and all the experience was great, I was fortunate enough to mingle amongst the stars and talk with them, which is rare most of the time for beginners.”

Further down the road, he had the opportunity to work with Coco, who is married to SVU actor Ice-T. Gerard happened to be an actor that was chosen to show Coco the different techniques to use in developing your character and setting during an acting workshop. This only enabled him to have a mini-appearance on her show.

Gerard has worked on TV and film projects through out the years and has found both to be very challenging, all depending on the director. He said in his eyes, he believes each director will always test their actors differently to get the best quality performance.

Gerard was born in California but soon came to Queens, New York where he was raised. He admitted to me that he feels that his surroundings have aided him in the roles he has been offered.

“I’m sure it has contributed somewhat. I think each person’s life experiences are what make’s an actor’s performance as a particular character so believable.”

Gerard has played many different roles, from a concerned father to a ruthless mob boss. Because of his look and martial arts training he has landed roles that tend to be the “tough guy”. Like many other actors with the same credentials they tend to be type-cast. But Gerard does not think it is necessarily a bad thing, but yet he has managed to play outside of his stereotypical role showing that he has great range and depth as an actor.

From his appearance on Law & Order in 1998 to his role on the TV series “Deadly Sins” in 2014 Gerard has proven to be in demand. Yet Gerard is best known for his work on Dark Shield (2013) and Freeze (2014). Currently, the film “Freeze” is in post-production which is a fan based film on the Dark Knight – Batman and Mr. Freeze. He plays one of Joker’s menacing henchmen who end’s up crossing paths with Batman.

Another two projects in the mix is “The Life” and “Vesuvius” In the series “The Life” he plays Detective Ben Pitre who is motivated to change the landscape of which he patrols day and night. The other project which is a short action SyFy aimed for the festivals in 2015, Gerard takes on the role of futuristic elite soldier, Manny Delano. He managed to ace both of these roles without losing a beat.

One project that can launch Gerard Cordero’s career to the next level is an upcoming TV Series to be out in late 2014, early 2015 that is said to be a blend of “The Sopranos” and “The Wire”. Created by Taheim Bryan “South Side” Original Series is based out of South Jamaica, Queens, which in the 80’s was considered an extremely volatile area. This TV Series offers a host of notable actors like Ice T, Method Man, Treach, Mike Epps, Kymani Marley and much more. Gerard again picks up an impacting role of a Detective named Jerry Rothman aka ‘Big Bird’ who’s main purpose is to use everyone in his world to accomplish a specific goal, bringing down the bad guys.

An additional career launcher for Gerard is another new TV Series created by Redfield Thomas to be out in late 2014, early 2015 called “Organized Crimes” which evolves around Philadelphia crime families. This time Gerard’s role is one from the other side of tracks as he plays Frank Capone, a ruthless mobster out for revenge.

Besides the projects mentioned for 2014, Gerard is part of a feature film that is in pre-production called “Memoirs of the Streets of NY” created by Joe Gawalis. This film is set around a big bank heist; Gerard plays Sammy Prato, a conflicted individual that is torn between two different worlds.

In addition to all these upcoming projects, he recently completed a short action film called “Nostrae Realitate” which won Best Action Short at the Urban Action Showcase held in New York City at HBO Headquarters. For this film, Gerard won Best Action Actor for his performance and among the celebrity judges was well known martial artists/actors Michael Jai White and Kelly Hu.

Gerard Cordero is off and running and not looking back. His talent and ambition is evident with every role he tackles, he is definitely one actor to keep an eye out for. To keep up with this rising star, visit his website at http://www.GerardCordero.com