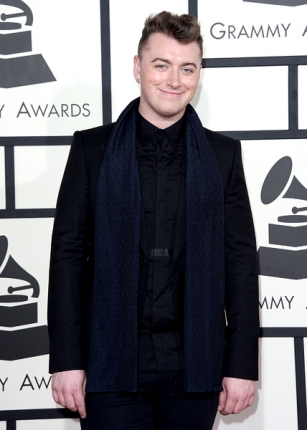 “I’ve never been in a relationship before and I really wanted to make an album that was about love,” Smith says. “But in different forms of love — so unrequited love and loneliness. I’ve been brutally honest in the album.”

The apparently aptly-titled “In the Lonely Hour” is set to drop June 3 in the U.S. via Capitol Records (May 26 in the U.K.). According to Smith, it will feature collaborations from Eg White (Adele, Florence + the Machine), Jimmy Napes (Naughty Boy’s “La La La,” Disclosure’s “Latch”), Joel Little (co-songwriter and producer of Lorde’s “Pure Heronie” LP), and writer/producer Fraser T Smith (Adele’s “Set Fire to the Rain,” Taio Cruz’s “Break Your Heart”). The falsetto-laced, Two Inch Punch-produced “Money On My Mind” is the current U.K. single.

“Sound-wise, I’m really limitless in the way i write songs,” Smith says. “Whatever comes out, comes out. Every song is completely different. I hope there’s soul in the album.”

Smith was at the GRAMMYs because of his collaboration on their 2013 album “Settle,” which was nominated for Best Dance/Electronica Album.

“So far this year has been so crazy,” Smith reminsces. “There’s so many ‘pinch yourself’ moments. I’m just happy to be here, taking each day as it comes and trying to have as much fun as possible.”