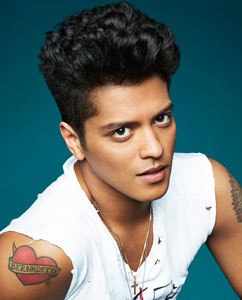 Bruno Mars has rolled out an extensive list of summer tour dates for his ongoing Moonshine Jungle world tour. Following two back-to-back nights in Mars’ hometown of Honolulu on April 18 and 19, the trek will hit arenas and amphitheaters across North America, beginning on May 27 in Fresno and running through August 17 in Englewood, CO. Mars will be joined by special guest Pharrell Williams in New York, Los Angeles, Toronto, Ottawa and Montreal. In addition, Aloe Blacc will join the bill as a supporting act on multiple dates. Tickets for all announced dates will go on sale on Monday, February 3.

Before that gets underway, Mars will headline the upcoming Pepsi Super Bowl XLVIII Halftime Show at MetLife Stadium in East Rutherford, NJ, on Sunday, February 2. In addition, he and his eight-piece band, The Hooligans, are set to continue their extended engagement at The Chelsea, the newest performance space at The Cosmopolitan of Las Vegas, with upcoming shows booked for February 15 & 16, May 23 & 24, and August 22 & 23.

The confirmed tour dates are as follows: