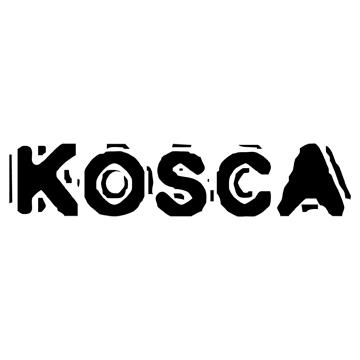 There are times when two heavyweights come together and manage to acquire great dividends. Such examples are Bjork and Thorm Yorke or David Bowie and Queen. Recently two very well respected and talented recording artists teamed up to develop not only a unique sound but a universal vision.

The two artists are Chris “The Greek” Panaghi and Josh Harris. Both of these individuals have a musical track record that can fill a book. The marriage of these two professionals took root when they both were chairing a panel at the annual DJ Expo in Atlantic City, New Jersey.

“Chris “The Greek” and I met a few years ago at the DJ Expo in Atlantic City. We were both on the Producer panel and hit it off instantly. It’s odd how many mutual friends we have, but somehow we had never met before that conference. We loosely talked that week about working together and getting me involved in some of what Amathus was doing, and Kosca grew out of that.” added Josh.

Josh and Chris came from diverse musical backgrounds. Chris first started off as a mobile/club DJ then graduated to working on production and remixes for major recording artists. His name became a staple in the music industry with at least 9 tracks that made it into the Top 10 on the Billboard Charts. Josh on the other hand took a more traditional approach, he first studied classical piano then attended College where he learned the art of musical theory and composition. He would soon expand his craft after moving to New York and linking up with remixer Mike Rizzo. Along with Mike they released some noteworthy remixes that catapulted his name in the industry. In 2001, their first remix release “Never Had A Dream Come True” by S Club 7 managed to be the most played record on WKTU that summer.

“Kosca is our thing. It was evident from the first idea and tracks we worked on together that we had something special. We wanted to do it our way and since both of us like to work in a streamlined, organized fashion it worked out well.” added Chris.

Kosca developed a floor banging sound that has the clubs jumping on a global scale. They have already released a string of releases under the Kosca moniker. Tracks such as “Castles In The Sky” modernized a dance music classic from Ian Van Dahl and club thumpers “Where The World Takes Us” and “Come Away With Me” gained great support from key Club DJ’s and Radio Mixshow DJ’s.

Kosca has also released quality crossover vocal records that both Chris and Josh are very proud of. The single “Love Will Find A Way” has caught the ear of many tastemakers in the music industry. It’s a motivational feel good track that leaves you wanting more. “Falling Down Like Rain” featured the vocals of Cristi, who reached the finals of X-Factor Hungary, and helped to build on the success by gaining more international support.

“We feel that our releases show depth and are a great reflection of our style as a production team. “Love Will Find A Way” and “Falling Down Like Rain” are the essence of what Kosca is all about and we’re so happy of the response we have received. We have big plans for more great music in 2014.” says the duo.

One of the major highlights for Kosca is their ever growing presence on the social media side. Their name is becoming a norm in the music industry as they build up their stable of explosive releases. Kosca has also worked on remixes for both Spirit Kings and Darren Round.

Besides that they have spread their wings and have even more offers for collaborations with artists overseas. Kosca has become “our thing” in the music industry and look to be even more with every one of their massive releases!