With the threat of a jail sentence upon Chicago rapper/resident law-breaker Chief Keef, there is very little we can do to restore a shred of ambition into the life of the under aged upstart. What we can do, though, is look clearly at moments of ‘what could have been’ throughout the rap industry world.

There’s something incredibly damning about potential. Artists are doomed to be compared to versions of themselves that exist entirely in the logical edition — versions that may or may not have been attainable. If an individual doesn’t squeeze every last ounce of performance out of his or her creative ability, he or she is labeled as lazy, not committed enough, a loser. Chief Keef has at one point or another been hit with all of the above. In the eyes of many in his native Chicago, the artist born Keith Cozart committed the unforgivable crime of wasting his talent. His ‘habits’ have been called into question and his lack of artist preparation and his management’s strategy are an easy target for those who wish to diminish Keef’s accomplishments as a national artist.

What gets lost in the shuffle is that before his legal issues, bastard-like attitude, and animal-influenced culture hindered his insight on being able to turn things around, Keef gave rap fans exactly what they wanted: a street record that spoke to the masses on things they like: flaunting, not endorsing snitches, and the streets respecting their presence.

I’m sure this wasn’t what Interscope Records (who signed the rapper to a multi-platform contract) had envisioned.

At the start of 2013, there was a bubbling optimism surrounding the artist and the sense that things should turn around. Alas, Keef’s ‘turnaround’ would end after a few days after being detained on probation violations stemming from attending a gun range session. It’s easy for hip-hop fans and the internet community to blame a publication for fueling the arrangement that led to Keef’s detaining, but honestly guys: did said publication put a pistol to Keef’s head forcing him to conduct an interview at a gun range? Or did said publication drug up Keef and drag him to the gun range to conduct the interview?

Or even better, maybe said publication also forced him to do this act too:

In December 2011, Cozart left his grandmother’s home holding a coat over his hands in front of his waistband. A policeman stopped to question the rapper, who dropped the coat, flashed a handgun and ran away. Officers chased then 16-year-old Cozart, who turned around several times and pointed the gun at them. The policemen “discharged their weapons,” but missed. They caught him a half-block later and recovered the pistol, which was loaded. Cozart was charged with three counts of aggravated assault with a firearm on a police officer and aggravated unlawful use of a weapon. He was also given a misdemeanor charge for resisting arrest. He was held in the Cook County Juvenile Detention Center until a judge sentenced him to home confinement at his grandmother’s house.

The cries of “you are making lots of money” cannot put any ounce of savior into anyone’s thought process, no matter the 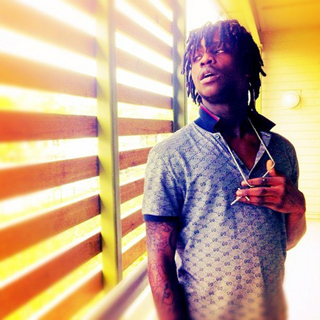 circumstances. Simply put: if a person does not want to be helped, they cannot be helped. Recommending that community leaders (Cornel West, Spike Lee) should get involved to help turn around Keef’s culture is laughable at best. Why attempt to waste energy and time into someone who has demonstrated that they have no regard for society in general?

Doesn’t this artist have family members like everyone else?

Great art often comes from the most dark and desperate times within struggle and vulnerability. For many, this often brings out the best in an artist’s creative sensibility. For Chief Keef, can this be applied to the same factor? Or was he trapped, faced with a nearly impossible situation that his handlers pressed upon him?

Instead of following the formula of others who battled back with defying results, Chief Keef gave us his masterpiece.