Chris Brown: The Makings of an American Bastard

You wanted to believe he was the exception.

He not only beat the drug-inflicted wave of the early-mid 2000’s artists, inspiring many with his resilience and determination as a triple threat (dancer/singer/songwriter), he also defeated the skepticism associated with the infiltration of walking sexually-charged male artists in urban music. He debuted as a recording artist without a major feature, and he knocked down every assumption about young R&B singers who had no appreciation for anything other than to sing about pouring champagne on expensive-tasted (but barely booming in the bank account) clad women at the nearest ghetto nightclub, and then banging out the tracks out of their hair at the nearest motel.

It was commendable how Brown didn’t sing and thrust every 5 seconds. Those in the business who openly questioned his commitment to growth as an artist only seemed to be envious of his fledgling success.

But now Brown’s once peerless reputation is crumbling into dust.

A domestic battery incident with his then-girlfriend before the 2009 Grammy Awards has targeted Brown for the past 3 years. But unlike past singers who have been linked to domestic violence over the years, the media has not had to publicly portray Brown as a walking time bomb during his ‘redemption’ period of bleaching away the domestic beat-down incident, because he has saved them the time by putting his ghetto monkey behavior front and center.

One of Brown’s neighborhood allies, fellow R&B tough guy Trey Songz, went before the press insisting that while he feels Brown is a good guy, he does NOT hang out with him to be lumped into his pigpen pile of legal mess. Songz (who grew up with Brown in the Petersburg, Virginia region) has since re-branded himself as a ‘PG-13’ R&B artist, while retaining some elements of his influenced “sex-you-up” direction.

Brown’s girlfriend at the center of the 2009 domestic incident — a popular Pop music artist — initially denounced the actions by Brown while spreading minor awareness to the 18-34 demographic about the ramifications surrounding domestic abuse, only for her to put lipstick on a pig and rekindle enough prior ‘magic’ to help fuel a big nightclub brawl between Brown and Grammy Award Winning Rapper/Songwriter/Former Teen Actor Aubrey “Drake” Graham in New York City’s WIP establishment in June 2012.

(NOTE: Drake wasn’t arrested. Brown later made a rap diss record to Drake a few weeks after the incident. Brown’s attorney claimed Drake was the instigator. About eight people were injured during the brawl, including San Antonio Spurs star Tony Parker, who had to have surgery to remove a piece of glass from his eye, and a tourist from Australia who suffered injuries to her face and head and received sixteen stitches for her head as a result.)

There was once comfort in the young singer not backing down from those challenging his artist integrity. Only someone who knows he didn’t do these things would so strongly dispute his behavior 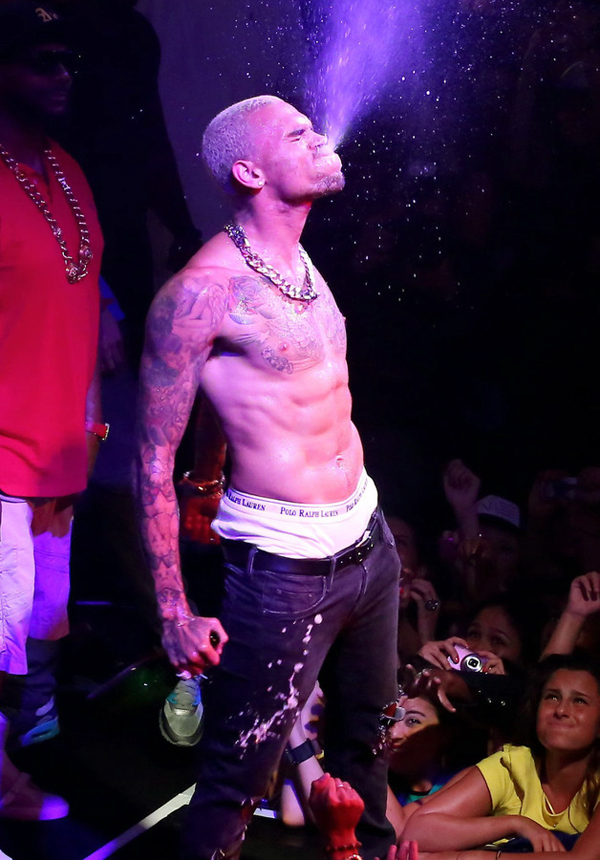 But then along came the PR team who provided no discipline whatsoever towards Brown in any capacity regarding his behavior.

In fact, there’s an argument to be made that Chris Brown’s behavior since 2011 is more of a representation of an American Bastard now than ever, thanks to his role in the social media world. The beat-down specialist is one of the more popular figures with various black gossip bloggers, and is one of two artists, along with popular 1990’s rapper DMX, who can do absolutely no wrong with the gossip blogging universe, particularly at popular gossip brand Global Grind (who has convicted felons serving as managing editors of the brand’s content). In fact, more registered users on social networking website Twitter follow Brown — whose most popular tweets usually include pouring champagne on women and partying at adult club establishments with fellow tough guy rappers Lil’ Wayne and Game — than NEYO, also a popular singer/songwriter/dancer, who despite achieving worldwide acclaim, has received longtime scrutiny from the urban community for his lack of street credibility and more mature taste in wardrobe and appeal.

Much like comparing controversial former NBA All-Star Allen Iverson (who’s career mirrored Brown’s current decision-making, and singlehandedly spawned the current NBA dress code) and fellow All-Star counterpart Grant Hill, one is celebrated for idiotic choices that ultimately made him persona non-grata from the NBA as of 2010, while the other has maintained a conservative image, and is currently the second oldest active NBA player for the 2012-13 season, but is the subject of many jokes within the urban community for a variety of reasons.

Brown’s road to repairing his damaged image begins in 2013. Right now, it certainly looks like Brown’s approach of “bring it on if you talk about me” might not work. Certainly his appeal to women in particular seems to have progressed in the wake of his behavior:

i would let chris brown beat me ?

Chris brown could beat me up anyday… Just sayin.

Shoooooot, if Chris brown beat me and we broke up, I’d forgive him & take him back too . I ain’t even mad at Rihanna . Have yall SEEN him?!

While I do not have any children, I do have 2 teen nieces, who are fixated in pop culture, much like the listed twitter users above. That has to be alarming on all levels. This also doesn’t include the legions of 30+ year olds who are part of this culture of worshiping the behavior.

It’s why Brown’s record label RCA Records should be a little nervous.

What was just a few isolated incidents has snowballed into the makings of a certified American Bastard, who likely will retain the King of the Mountain throne of ghetto behavior for the foreseeable future.