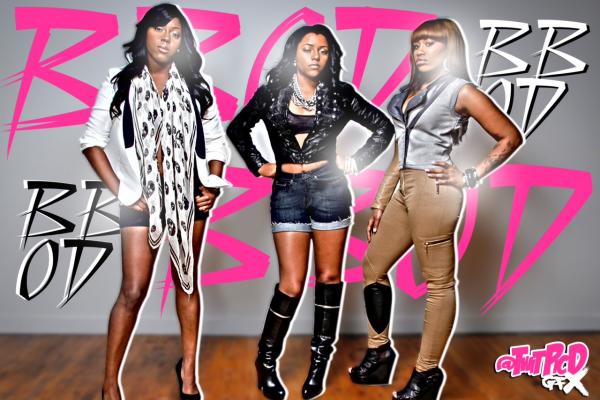 In the music industry women groups made their first push in the 1950’s with acts like the Supremes and the Shirelles. Then in the later part of the 70’s and 80’s you saw The Go-Go’s and headliners like Blondie and Joan Jett. But all this was in the rock and alternative music world. But Hip Hop was still in its infant stage and was soon to be predominately a male dominated world. Yet the ladies were not too far behind.

There came many well renowned African-American artists like Janet Jackson, Whitney Houston and Queen Latifiah. Then in the 80’s we had the first all female rap / hip –hop group emerge, Salt – N – Pepa who made a major splash in the music world. Then came another trio called Sequence. Yet there was still a gap to be filled with a more flamboyant in your face kind of female group.

That would soon come true twenty some odd years later, in the rough and tumble neighborhood of Harlem, USA. Four young ladies would soon forge a solid bond of friendship and music. These four young ladies always had a love for music and the dream to put their skills to work.

As told by all four members of what was to become BBOD: “Our inspiration to join the music business is funny, and yet still shocking being that it came as a surprise to all of us. We realized that we all had a hidden talent one night while free styling to random beats saved on an Ipod. We than began to take notice that what we were saying wasn’t bad, and yet very catchy which lead us to recording our first song “Doobie Rap”

The ladies began to build on their discovery that they all had hidden talents that would pave the way to their current success. The meaning of BBOD was derived from others calling them “bad bitches” but they altered its meaning to (Bad Beauties On Deck). That title seemed to stick and at least portray them in a better light.

Each of the ladies stage – names pertain to their personality. For example Miss Mo Money explained that her name originates from her being the one out of the group that was always known for having the latest gear, and driving the hottest cars since she was about 16 years of age. Mona L told us that her name derives from her spontaneity and sense of humor. Bossladee laid out for us that her title comes from her wild and crazy attitude. Last but not least is Sexxylexxy whose moniker stems from her flirty yet innocent look that every man is drawn to.

The group’s persona has not only attracted the music industry but the community in which they live in. Recently, the all girl group played a big part in the African – American Day Parade. They were featured on a float and made a statement to say the least as they all explained: “Being apart of the African American Day Parade was exciting! Growing up in Harlem everyone always looked forward to the Parade every year, all the kids would get new outfits just to sport at the parade and hang out with friends. So when we heard we had a opportunity to participate in the parade, we were not only shocked but it was a blessing because as kids this is a event we would not miss and now we are able to participate in it. We would never have even thought growing up we would have our own float in the Parade.”

BBOD is probably best known for their debut track “Oopsy Daisy” which received some airplay with stations like 105.1. Their luck began to sprout when they were asked to come in for an interview with the station. The station is known to have interviewed some of the hottest acts in the business. BBOD seems to be making some waves to be asked to sit in for a one on one with the resident DJ.

“It was one of our greatest experiences ever being that we were on one of the biggest radio station in the tri-state. Being in the same building as all the biggest artist worldwide inspired us to do even better,” admitted all the members.

The group has yet to release a full album but is gearing up for it in the near future. They are preparing to release their second mixtape which will be available online through their website http://www.itsbbod.com/#!bio. Recently, they released a track with Julez Santana called “Dummy” which has already garnered some attention on Hip Hop sites worldwide. The ladies admit it was exciting since it was their first feature.

When it comes to their personalities we were curious to learn if Sexxy Lexxy was inspired by the Spice Girls with her distinct look: ”Really? Not all. People always tell us that we remind them of the Spice Girls as a group, but that’s not were style comes from. I always had the same style growing up, I dress how I feel… lol “sexxy”.”

We also pointed a question to Bossladee with her moniker if it meant that she was the “boss” of the crew; “No, it doesn’t mean that I am the leader of the group. My name means I am bossy because I make my own rules. I never liked the fact of having a boss. I do what I want and I get what I want, Without the help of anybody.”

These ladies are destined to make some major noise and are due to set up some shows for 2012. For anyone interested to check out some of their tracks you can visit their http://www.myspace.com/therealbbod or their website.