My Man, his man: could you date a Bi-Guy? 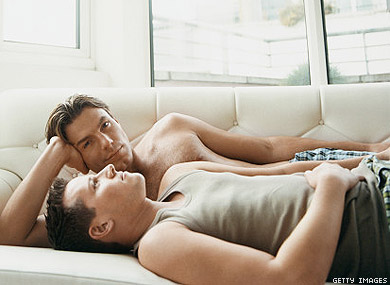 So I posed this question to myself after hearing a student tell her boyfriend was gay for one of his friends. It amazed me how open most of the current generation is, so I questioned if I could date a man who liked and had been with men. I couldn’t really see why I couldn’t be, but I wasn’t totally comfortable with the idea. I began posing this question to my friends, folk on twitter and many women resounded with an unfaltering NO! But why not? I think it’s about labels, penetration and society in general.

Many of the heterosexual women said no, they said they would stay if he wasn’t open about it, but they found themselves already committed to him. (I wouldn’t because then I’d see him as deceitful, another label). I think the idea of another man penetrating a man is another reason women hesitate. They can’t see their man with another man, yet the idea of female homosexuality or bi-sexuality (more labels), is quite acceptable, it’s even encouraged. But be it man on man, social taboos linger even when they have no validity.

Some women who were openly bisexual or open-minded understood the perspective of a bisexual man and wanted the same respect so they were more willing to date, engage and be with an openly bisexual man. I understood but wasn’t convinced as to wither I could support or take on the role or task of openly with no judgement being with a man who has loved other men.

So here is how I thought processed this question with the aid and guidance of @AskABiSexualGuy (I swear he’s my new best friend, in my head, any whoo…), I was able to ask open and honest questions and he answered just as openly and honestly, so here is where those conversations lead me.

1. I hate labels (and I don’t use hate often). I believe the issue with most of this is the labeling, if we were not designated by labels would the effect be? Who would care, who was sleeping with who, as long as everyone was safe and it was healthy? The label doesn’t matter to me because while he is with me, he is with me, he shouldn’t be anything but mine, he belongs to no other man, or woman, he is with me. So, when does the label end and the just loving begin? 1. B. How will his labeling affect me, will I now be the woman who dates the bi-guy? Am I now queer? I like my life to be that, my life. If I were fucking six men, I don’t want to be labeled a hoe, no more than I want someone to know how many men were in my bed at any point and time. Same with the man I am dating. But I understand the need for labeling and identifying for oneself. As a friend I can support and encourage their choice, as an individual, but within my personal life, I don’t think I’d want to be so open, so labeled.

2. I’ve kissed men who kissed other women, these men have even feasted on the nether parts of said woman, or women and I don’t think twice about that (well I do, but… ). A man who has kissed another man or done things I haven’t even done (Not even going into that right now…), I question and I not sure as to why. A gentleman once tried to get me to perform fellatio on him said, “it’s just skin”. So why is it ok to be with a man who’s been with other women in a why I don’t desire but not a man who’s been with another man in a way I possible have?

3. He’ll desire and want for what I can’t provide. This is a concern and issue that lies even in heterosexual relationships, when the man prefers women of a certain physical characteristic, or race, or socio-economic class. A man into women can leave for another desire, just as a bisexual man can, and the thought that he’ll leave for another woman is less the concern than he’ll leave for another man. What if, just what if, he doesn’t. As a woman if he has a need or sexual desire are you willing to explore it to keep not a bi-man, but a good man. Someone said there are studies that bi-persons tend to be more monogamous. If out of their choices they choose you, are you not willing to give the chance to see what they maybe offering?

4. Many women were ok if they had found out after they had been dating. No. No. No, I want honesty up front, not because I think he should have to discomfort himself, but because I deserve the choice, just as I’d expect a straight man who I had intentions for to be open about himself. A person not willing to disclose themselves and hide maybe a deceitful person, why are they ok to be with someone not willing to be open, honest and vulnerable? Can you even create love in a dishonest relationship?

I believe all people deserve to be as open and honest about themselves as the next. To live the most happy and healthy life as possible and if the one I am with doesn’t feel that for whatever reason, I am not doing him, nor, myself any good. Will I make an effort to date a bisexual man? No more than I do any other man. I intend to not judge him any more than I judged the guy I spent time with who’d previously done porn. I had to gauge myself an know my level of openness and know when it was or wasn’t right for me. I feel this is the same for someone who’s sexuality is more open than my own.

I’ve had great conversations with @AskABiSexualGuy and have shared openly how our discussions make me feel, my own reactions to discussing his lifestyle and how hearing about him with another man, doesn’t affect me any more than hearing about a man with another woman.

Maybe I am numb, or I have evolved fully into this world we are now living in, tomorrow I may see this all differently. I know for certain I’d rather date an openly aware man, “bi’ or exploring, than a closed off man of any kind. I believe being a more openly aware woman my benefit me and other women in the long run, because maybe if some of these men you feel they must be shamed and hide feel a place where they are accepted they may practice a new and safer lifestyle, which can only benefit us all.

So, now ask yourself could you date a bisexual man?