It took a year, but we finally caught up with the speedy power girl to talk a variety of topics, as nothing seemed to be off-limits.

With her still-new-enough-to-smell-the-newness-on-it radio show at ThisIs50.com already receiving nominations via the 2011 UMA Awards, Radio & TV Personality/Producer Maya The B has proven that once one door closes, another one opens. Formerly one-third of ThisIs50.com talk-show mainstay The Round Table Show (alongside hip-hop executive Lenny S & former DJ Ron G manager Big Lite, which was at one time produced by the Founder of Avenue 1) and also one-third of it’s spin-off brand The Syndies (which enjoyed success under the Thisis50.com banner), the NYC transplant via Boston has carved quite a resume for herself…by herself, primarily operating as a one-woman machine throughout most, if not all of her radio run.

It took a year, but we finally caught up with the speedy power girl to talk a variety of topics, as nothing seemed to be off-limits.

Avenue 1: This is honestly one of the few times in hip-hop right now where putting out an album to a degree can take a backseat to consistently performing – do you think this could backfire for the business in a couple of years, or can help regain some of the creative art that has been lacking for sometime now?
Maya the B: Well, in order to get booked for shows you need material out. So I wouldn’t say that putting out an album takes a backseat because it’s needed in order to have the opportunity to even perform. But, I will say that to the established artist or a buzzing artist- concerts are one of the main sources of income. Since the internet allows people to download music for free- album sales have suffered, so shows have become one of the necessary ways to make money. Creatively, performance wise- I think it makes artist dig deeper- especially rappers to have more entertaining shows to keep their fans wanting more.

Do you think the internet community pays too much attention to what artists tweet?
I think twitter is amazing. It’s a great tool for upcoming artists and established stars. Definitely, the public takes every word to heart and the press will take 140 characters and turn it into a news story. But, overall twitter is a positive outlet to get to know your favorite artist and get some inside into their lives.

What song do you hear and wish you had written?
Wow. Let’s see. There’s so many. I would probably say anything by Sade. I love her & her band. They’re so passionate about their music and you can feel it. I’m all about the emotion that music brings out of you. And, Sade always makes me feel sentimental. “Love is Found” off her last album is in heavy rotation in my library at the moment.

What was the first album you bought with your own money?
Actually, FUNNY STORY! Me and my sister caught wind of “Columbia House” which looked like a steal when you’re 10 years old and they’re advertising 10 cd’s for 1 cent! So of course we took advantage of that and ordered a whole bunch of CD’s including Snoop Dogg’s “Doggystyle.” Later, we learned that in order to take advantage of this deal- you signed onto buying 6 cds or something throught the year for regular price! Soon we got a collections letter and my dad was SHOCKED to see that Columbia House didn’t do any type of inquiry to see how old their customers were before signing them up! It was pretty funny but we started our every growing CD collection with that experience!

What was different about the business in Boston versus the business in New York?
Well, Boston doesn’t have an “entertainment” industry. I did everything I could there before realizing I needed more and that could only be found in the entertainment capital of the world, New York City! I came to NY with an open heart and mind and took advantage of every opportunity that came my way. The city will take you down if you allow it to, but it will also bring you to the top if you put in work and dedication towards your passion! Definitely the city where dreams can come true!

We’ve seen bloggers get into singing careers, including B.Scott – tell the truth, are we going to see a Maya the B album?
HELL NO.

Take us through your first radio gig, and the experience, while knowing that you were going to pursue a lane in the field.
Well, I didn’t always know radio would be my love. I actually started in radio in Boston at WJMN 94.5’s promo department. It was there I fell in love with it and started to explore the idea of becoming an on-air personality. When I got to NYC – I started producing and interviewing a vide magazine w/ a high school friend. It was called GWOP and focused on celebrity’s financials. This was my first time conducting on-camera interviews. Not to toot my own horn but I was a natural. Having no formal training, my love for Hip Hop and all its components made me very curious to know what goes into making the music and the movement. I ask things from a fan point of view, because that’s what I am; first and foremost. I got introduced to radio when I did my first interview w/ DWI from “Da Matrix” which is an underground radio station in the Bronx. I came up to promote GWOP and kind of took over the show. I have always been an entertainer. Since, I was a kid I enjoyed making people laugh and it gave me so much pleasure to do so. After that interview, I started my own show at Da Matrix studios and since then- I’ve been going super hard trying to work my way up to larger platforms. 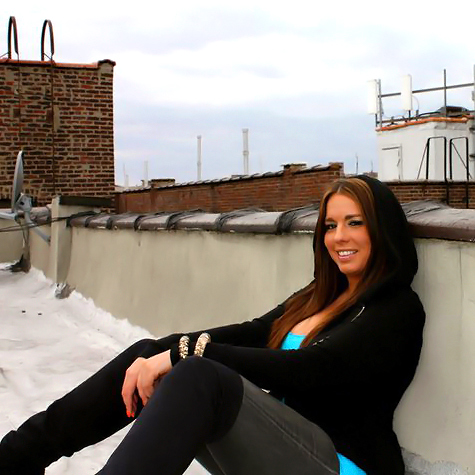 What’s the biggest misconception people have about you when they first meet you?
What’s funny is people often think I’m going to be “hollywood.” I’m really a down to earth person. I love people. I will never, ever be pompous or presumptuous. I respect everyone’s story. I give everyone the benefit of the doubt . Some folks feel like they have the right to change with the onset of fame. But, in my opinion- the only way you can make it through this industry- is to remain true to yourself. When you start acting like youre too good for people you once fucked with- karma comes around to bite you in the ass. When people throw shade my way- I try to brush it off and keep going and take solace in the fact that one day- those people who turned their back on me when I needed them- will be looking to be apart of my movement. That is personally satisfying to me. And, I don’t shit on them when those times do come around. If anything, I help them and make them feel stupid for jerking me. You must lead by example so that people can follow and do the right thing.

You’re one of the few female media personalities in the New York City area who works hands on behind the scenes with your career. How important is being hands-on, and is having a backbone of sorts among a field of ego-drenched men play a factor in it?
Man, if you don’t know your craft from the bottom up- you’re doing yourself a great disservice. I’m a leader that gets down and does the dirty work. We cleaning the bathroom today? I’m right their scrubbing toilets with my team. LEAD BY EXAMPLE. In order to be a boss, you have to be able to put in the work on all levels. People don’t respect those who delegate but have no idea what it takes to do the work. I try to make my team feel like they’re individually important- which they are- and encourage them to give me their best because that’s what I only know how to give in return. Being a woman in charge comes with great challenges. Not only do I have to prove myself to the higher ups, I have to prove myself to my team who are almost all men. Historically, women have taken the backseat so I’m part of the minority that drive this MF-er! I won’t allow the idea to enter into my head that men are inferior to women. Socially- I can’t change the world but individually- I do believe there are women out there that are capable if not more capable of doing a job better than a man! This is not because I’m sexist because I love men and women the same. Really might love men more but I also love the fact that women are underestimated. That motivates me to blow past people’s expectations and take everything I do to the next level.