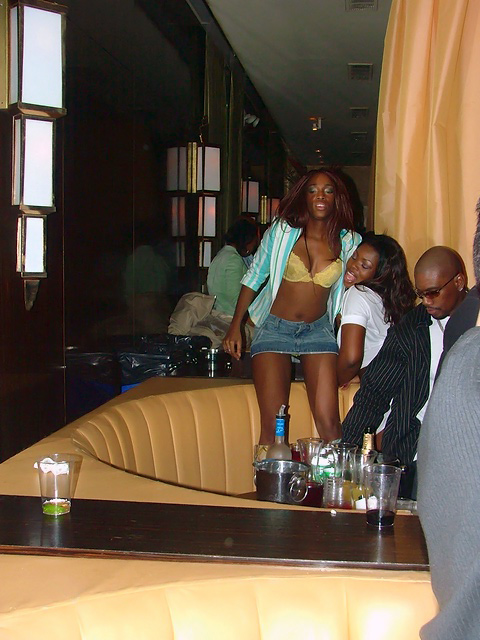 Testing the limits of now-2000’s nostalgia and the adage that time forgives all sins, the dating presence of “the groupie” has dropped significantly this summer. The last time we saw any flashes of the strong mindset that most are known for declaring, it boasted the honor of being the focal point of then-BET late night video show, Uncut.

Avenue 1 founder Brigante Chuckito went further, calling them “the lowest level of bottom dwellers next to photographers who attempt to get sex using their camera.”

Was the new millennium groupie really that bad? The short answer is, as fellow columnist/former model Eve Garcia might put it, “f@#k, yeah.” Their squealing at the NFL & NBA Draft parties, when combined with the clumsiness of trying their damnedest to be seen for what they consider their “come-up” is probably the biggest reason socialite is a dirty word.

Beyond fake designer bags and lack of character, liking a groupie can seem like an ethical failure: their personality and thought process frequently affirm a noxious value system in which a seething hatred of The Man coexists with a seething hatred of women, and rightfully so. These groupies have named Karrine Steffans among their heroes, but their most notorious accomplishment with this ‘artform’ was to have taken from Steffans her charging alienation and mapped it onto the effort-clinching, quest-accomplishing, so-called woman with power psyche.

And yet, despite this, when I recently attended an NFL Draft party, I experienced an unexpected sensation: pleasure. What’s astonishing is a level of class more stupid, more fun, and more interesting than history has given it credit for.

Heard today, the prototypical groupie is best appreciated as a complex comedic creation: eternally aggrieved and eternally spiteful, they conduct themselves as if they have more class than the royal queen of any country, it seems. Sometimes their antagonists’ transgressions are left vague: “Get ’em girls” is a term that most in the New York City area have coined with pride in their quest to import funds into their account. Other times, they detail their grievances in all their laughable banality: “I got them paying all of my bills” is an agonized screed … and proves not every woman on the planet aspires to be truly independent. “You might be in the wrong party with that after work party outfit sweetie,” A well known urban model-turned-super groupie from the mid-2000’s threatens one partygoer. It’s an absurd, adolescent taunt that makes me chuckle every time I hear it—and I can’t imagine any of these groupies don’t chuckle a bit at it, too.

It’s overly generous to argue that these women have completely f@#ked up the image of the independent woman in 2011; when they threaten to ‘send their army’ against trash-talkers…haters I guess, or names an athlete “come-up” in the first place, they probably don’t intend to exaggerate the womanhood mentality till it becomes satire. But in their quest to attract as many young, surly athletes as they can, the prototypical groupie clearly enjoys hamming up their role to the point of grotesquerie—and that might amount to the same thing.

Supporting Someone Through a Life Change